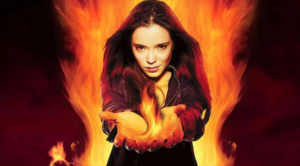 You really must be another level of bored if you decide to push play on Firestarter: Rekindled. Or you have to be a machoistic completionist who cannot rest until you can definitively say the next good adaptation of Stephen King’s incendiary novel from 1980 will be the first one. Color me as both.

Firestarter: Rekindled was a two-part miniseries that aired on the Sci-Fi Channel over two nights in March 2002. Put pithily, it looks like a TV movie from a network whose budget was peanuts until an inevitable rebrand would come many years later. Robert Iscove’s misbegotten sequel to King’s novel is clunkily plotted and as aesthetically dynamic as a primetime crime show that’s here for one season and gone the next. It’s no wonder that even amidst a crowded landscape of disappointing Stephen King adaptations, this one is so bad it’s almost entirely forgotten.

We’re “rekindled” with Charlie (Marguerite Moreau) roughly ten years after she burned down “The Shop” in the climactic finale of Firestarter. She’s a teenager living under an assumed name, victim to nightmares about her treacherous escape from the facility and the tragic deaths of both her parents. Enter Vincent (Danny Nucci), a corporate pencil pusher who works for a shady agency known as “System Operations.” Vincent is tasked with finding folks whom are part of a class action lawsuit, and Charlie is one of the people he’s tasked with finding.

Once her finds her, and understands her situation, Vincent unknowingly hands her over to John Rainbird (Malcolm McDowell), the slimy agent who caused her so much pain and torment when she was a girl. To her surprise, Rainbird survived his burns, and has spent the last ten years grooming boys with terrifying superpowers and developing his master-plan.

Firestarter: Rekindled is so indebted to the original source material that the first part can hardly find a way to stand on its own. It incessantly employs flashbacks to scenes from the first movie — except they’re not the original scenes, but recreated ones with new actors. All continuity is shot to hell with McDowell’s Rainbird being white as opposed to Native American.

The biggest victim is the character of Charlie. Iscove and screenwriter Philip Eisner (Event Horizon) tease us with the possibility of bringing some humanity to her character. Despite being self-sufficient, Charlie pretends to be keen on the idea that she’ll spend the rest of her life running from goons trying to take her into custody. The weight of her deadly powers and her hesitation to form human connections due to them potentially ending tragically is somewhat explored in the beginning of the miniseries, when Charlie goes to a club, which leads to a drunken one-night stand.

And yet, this is not the kind of miniseries that’s deft at handling such a complex, multilayered narrative arc. Once Vincent is introduced and the innerworkings of the plot begin to reveal themselves, Charlie is relegated to an enigma, a pawn, an object of fetishization, a monster, and a test-case, depending on which character you ask.

Another wasted soul is Dennis Hopper, who plays James Richardson, a father figure of sorts for Charlie. He was part of the same Lot 6 experiment as Charlie’s parents. The serum he was given gave him the ability to know the past, present, and future all at once. Much like Charlie, Eisner doesn’t have an idea what to do with someone like Richardson other than have him resort to spouting our vague, horoscopic insights about her Charlie’s future and taxi her from place to place.

Firestarter: Rekindled takes one interesting idea after another and turns it into a missed opportunity. It’s an ass-numbing slog at nearly three hours. Its sterile ambiance and uninspired music do little to elicit any shred of enthusiasm. Worst of all, it yet again makes the same mistake in failing its protagonist. As I stated, it’s gone on to be forgotten — rightfully so.

NOTE: As of this writing, Firestarter: Rekindled is available to watch on Tubi, free of charge.