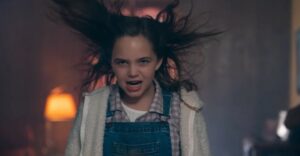 Stephen King’s Firestarter deserved a remake. A better one than this.

Sure, the idea of remaking a movie that was a box office bomb back in 1984 and whose source material hasn’t grown any more relevant in recent years isn’t a novel idea whatsoever. But Mark L. Lester’s pedestrian effort was only made more frustrating because of the potential the material harbored. It was an astonishing feat to see a plethora of A-list actors (including Drew Barrymore in only her third feature film role) recite such unmoving dialog in a movie that felt like an assortment of odds-and-ends of the horror-thriller genre.

Now, we have Keith Thomas’ Firestarter, which is a hair better than the original, but yet another grossly indistinctive adaptation of a book that has now been failed twice. Two strikes is enough damage. Thankfully, King’s library is expansive and growing.

The film’s best sequence is its opening credits, which shows the young couple of Andy (Zac Efron) and Vicky (Sydney Lemmon) as college students being subjects of an experiment, from which they gain special abilities. Andy possesses psychological persuasion, although the more he pushes himself to use it, the more his brain bleeds through his eye-sockets. The two have a daughter named Charlie (Ryan Kiera Armstrong), who harbors the ability to start fires with her mind. Andy has trained Charlie to suppress her problematic powers, but a tragic situation forces them to evade special forces, who want to see them both contained for life.

Unlike the original — which opened with Charlie and her father on the run from the police — Scott Teems’ (Halloween Kills) screenplay permits us a bit of context in the realm of Charlie’s home-life. It also shows us exactly what caused the two of them to flee in the first place. The first act is the strongest because it establishes the family dynamic well-enough that we think we’ll end up caring about the troubled duo in the long-run. Then things start to get muddy.

Thomas’ remake lacks any and all personality, eerily similar to the deservedly forgotten redux of Pet Sematary from a couple years ago. It’s plagued by a flat, ugly color palette, and the actors, once more, have so little enthusiasm that it sometimes comes off as a competition for who can care less. That said, Armstrong’s performance outshines Barrymore’s, somewhat due to Charlie feeling more like a teenage girl as opposed to a plot vessel. Instead, the criminally under-served character is Rainbird (Michael Greyeyes), the Indian who is trying to capture both Charlie and Andy. Teems’ fatal flaw is trying to give Rainbird redemption in a downright inexplicable manner. His motivations in the climax make no sense. How could they when the character is reduced to a few bullet-points?

Not even Gloria Reuben leaves an impression as the gender-swapped Captain Hollister (Martin Sheen in the original).

It’s actually surprising that Blumhouse didn’t reserve Firestarter for its annual “Welcome to Blumhouse” special, where they dump (I mean, release) four movies on Amazon Prime every Halloween. Thomas’ remake is so consistent with the mediocrity of the first adaptation that the best part about is the score. Only this time, it’s the great John Carpenter (who was initially tapped to direct the original before being passed over), his son Cody, and Daniel Davies arranging the compositions as opposed to Tangerine Dream.

I can’t be too mad about Firestarter. I’ll forget about it soon enough.

NOTE: Firestarter is now playing in theaters and streaming on Peacock with a premium subscription.