Doing Your Twenties:
On Cha Cha Real Smooth and the Cool Uncool-ness of Cooper Raiff 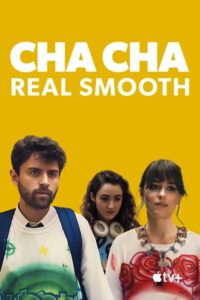 If you or a loved one has heard me wax poetic about either Cha Cha Real Smooth or Shithouse over the last few months, you should be entitled to compensation. Or at least more of an explanation.

Since watching Shithouse, the debut of filmmaker Cooper Raiff, on an interchangeable, lonely winter night in the middle of the pandemic, I’ve felt compelled to tell anyone with ears about the 25-year-old filmmaker. The film’s title remains a sticking point, as it’s the enemy of search engines and creates expectations more-in-line with Grindhouse than it does a sweet, relatable college drama.

The movie follows a college freshman named Alex (Raiff), who is experiencing a rocky first year of college. He’s watching everyone else have fun while he has mental conversations with the stuffed animal in his dorm room. Enter Maggie (Dylan Gelula), his RA with whom he shares a spontaneous, romantic evening. Then something weird happens; he wakes up next to her and she’s more disturbed than flattered. She tries to ghost him. He doesn’t take the hint. He thinks he’s fallen in love. She, on the other hand, just wanted a fun night. 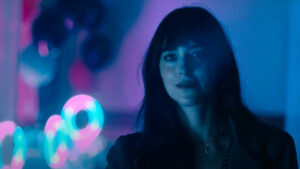 Now, Cha Cha Real Smooth is getting its time to shine, following its release on Apple TV+. Apple paid $15 million to acquire a dramedy about a wayward twentysomething named Andrew (Raiff), who takes on the role of being a party-starter/hype-man for bar mitzvahs at the behest of Jewish mothers. This comes after he meets Domino (Dakota Johnson), a perpetually depressed mother of an autistic daughter (Vanessa Burghardt). Domino has a fiancée who is constantly on business in Chicago. But this is not a movie about an affair. It’s something far deeper.

At the center of both these deceptively hard-hitting dramas is Cooper Raiff, a 25-year-old Texas native, who dropped out of Occidental College in order to pursue filmmaking. Had it not been for an impulsive tweet to indie director Jay Duplass, we might still be waiting to hear the voice of Gen Z with something on his mind. I can make the easy argument for admiring Raiff as much as I do because, let’s face it: anyone who knows me on a personal level knows I practically lived the events of Shithouse my freshman year of college. My proclivity for older women naturally magnetizes me to the subject matter of Cha Cha Real Smooth. Both films follow a twenty-something with a deep love for his mother, which hits me even harder after the last year.

But I push aside my personal bias here to dive deeper into what makes Raiff special. After rewatching both of his films this week, I’ve distilled his appeal down to one significant trait: “cool uncool-ness.” When I say “cool uncool-ness,” I’m referring to Raiff’s subtle confidence in the way he rejects positing himself as the most interesting or most suave individual on-screen at any point in time. Consider an early scene in Shithouse, where his character Alex, in so many words, cockblocks himself from a surefire hookup to leave a party and… call his mom. The only element more remarkable is that the ensuing scene isn’t played for laughs. It’s an intensely vulnerable moment that shows Alex sitting on a lonely sidewalk while lying to his mother saying that he called because he feels under the weather. He chokes down his tears as she offers the remedies only a mother can. He didn’t want sex that night. He wanted his mom. And to make that a focal point in his directorial/writing/acting debut at 22-years-old is probably the coolest uncool move I can imagine.

It was that moment during my first watch of Shithouse that proved to me that Raiff isn’t one for cheap comedy, much less small talk. He’s at his best as a writer when he posits two people in a cozy, dimly lit interior, avoiding usual “get to know you” questions in favor of something more meaningful. Such moments occur when Alex meets Maggie, and in a few beats, he’s in her dorm-room talking about how he has zero friends. Or when they’re walking to the cornerstore and he learns of Maggie’s parents’ divorce. Raiff isn’t interested in the menial dialog that steals our breath and wastes our time. Because this story is so deeply personal — it’s modeled after his real-life college romance — we can tell that Raiff is the type of person who would rather discuss the constructs of young adulthood with somebody he just met if only to gauge their perspective, as opposed to what they had for lunch or how their job is treating them. 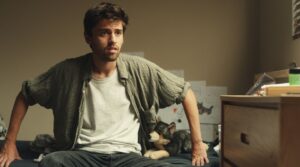 At its core, Shithouse is about a person who is so tethered to his life of comfort, emotional support, and connection that he can’t fathom how anyone else could coast through their experiences so aimlessly. Alex’s response is not to get to know people, but meet those, like Maggie, who are more impulsive, with hostility and disgust.

Contrarily, Cha Cha Real Smooth revolves around Andrew, whose defining personality trait is his ability to be a friend to everyone. He has a sorta-girlfriend who moves to Barcelona in the first few minutes of the film. Even when Andrew sees she’s found a new man in Spain, he’d rather mumble unkind words about her and him than confront her about the situation. When he first meets Domino, and learns of her autistic daughter, his first response is: “sometimes I think I’m autistic.” He quickly backtracks and acknowledges the awkwardness he himself created.

Later, back at Domino’s house, he takes a seat on her sofa. “I like your couch,” he says, just to kill the silence. “I hate it,” she replies. “That’s what I meant to say.”

This is Raiff’s Andrew in a nutshell. He can’t help but tell others what they want to hear. It’s Domino’s daughter Lola (Burghardt), who finally gets to the root of his problem while he’s babysitting her. Andrew has yet to discover the beauty of being in alone in a quiet room, or settle on how to manage when forced to entertain himself while others are preoccupied.

Critics of Cha Cha Real Smooth have opined that Raiff has written himself as an impenetrable, impossible-to-dislike nice guy. I don’t see it that way at all. Not only does the third act show Raiff’s Andrew acting like a totally selfish prick, the young writer/director doesn’t follow the beats of conventional romance stories. The flirtatious bits between Andrew and Domino are, at their core, about two wayward souls sharing empathetic moments with one another. The wraparound theme is Andrew learning to operate unselfishly, further contextualized by Raiff’s interview with The New York Times‘ Carlos Aguilar: Despite being a wunderkind, whose second feature netted $15 million from Apple TV+ almost immediately after Sundance closed, Cooper Raiff is impossibly modest. Casting yourself in your first two features is a recipe that could lead to pomposity. It could lead to the lines of character and actor being blurred, to the point where you’re watching a person fellate their own ego as opposed to something richer. Both Alex and Andrew in their respective movies are not perfect individuals. Even better, Raiff isn’t masquerading as Prince Charming. Alex oversteps his boundaries with Maggie more than a couple times. Andrew’s attitude takes a sour turn in the rising action of Cha Cha Real Smooth, and he starts blaming everyone for feelings he cannot process.

The commonality between the two characters is Raiff himself. In a deluge of interviews he’s given in lieu of Cha Cha Real Smooth‘s release — and trust me, I’ve read many of them — he is comfortable with being in a gray-space at the moment. He doesn’t quite know if film, or even acting, will be his long-term play. In an interview with The Ringer‘s Keith Phipps, Raiff still finds himself wrestling with the idea of being an actor, or even acting ever again:

Directing is the thing that I really, really love so much and want to continue to work on and get better at.

Raiff’s next film is a complete pivot. It’s called The Trashers, and tells the story of Jimmy Galante, a Connecticut trash magnate and associate of the Genovese crime family. Galante bought the city’s minor league hockey team and delegated its responsibilities to his son. The team then became notorious for its violent style of play. Galante is also one of the chief inspirations for the character of Tony Soprano in The Sopranos.

That’s a sharp 180 for a 25-year-old director whose debut and sophomore films were quiet, charming dramedies revolving around figuring out how the hell one spends their 20s. That said, I feel it’s best for Raiff to branch out. Even as someone who dolled out four stars to both Shithouse and Cha Cha Real Smooth, I concede that his next feature would be better served to be completely divorced from his previous works.

And above all else, thank Christ it’s not Thor 5. Shithouse was released on VOD in October 2020, after having its debut at the South by Southwest Film Festival nixed due to the COVID-19 pandemic. With America hyper-fixated on a messy, maddening election cycle, not to mention rising case numbers and mixed words on a vaccine, it was a distracted time that rendered the film all-but invisible. The title did it no favors either; expunging itself from search engines and leaving it unable to be conventionally marketed. I saw it, loved it, encouraged my friends to see it (most loved it), and then made it my #2 favorite film of 2020.

I remember my initial reaction to Apple TV+ acquiring Cha Cha Real Smooth. I was mixed on the move due to the fact that, anecdotally speaking, I feel like that is the one streaming service not many people have. However, this was before CODA would win Best Picture at this year’s Oscars. Seeing that made me think that after spending $15 million on a low-key, charming indie dramedy, the film would indeed reach a wider audience with the help of a marketing and awards push following its June release on the streaming service.

At the moment, there is palpable buzz on social media. I think a Best Picture nomination is unlikely, but I could absolutely see a Best Original Screenplay nod for Raiff. Best case scenario, Dakota Johnson gets her first Oscar nomination, which would be a thrill to see in itself.

As of Raiff, he deserves the time and space to breathe, as hard as it may be when you’ve proven yourself to be so talented at such a young age in such a hungry industry.

REVIEWS OF COOPER RAIFF’S MOVIES:
My review of Shithouse
My review of Cha Cha Real Smooth (published after its premiere at Sundance 2022)