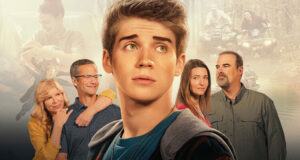 Rest assured that the Kirk Cameron/Kendrick brothers-produced Lifemark — which is being shown in theaters as a Fathom Event for the next week — is not as loathsome as something like Pure Flix’s anti-Plan Parenthood propaganda Unplanned. It is in essence a pro-life movie, but it spends much of its runtime examining what a great life its adopted subject went on to lead as opposed to feeding us anti-abortion nonsense.

But like so many films in the contemporary Christian landscape, it settles for easily digestible solutions to complicated problems. Yet even that’s not why Lifemark ultimately fails to be successful. This mawkish cry-fest fails to be the least bit entertaining as it labors on for 100 minutes. Much like its protagonist, it’s in search of a personality.

The film is based on the true story of the adoption of David Scotton, which garnered recognition thanks to a short documentary called I Lived on Parker Avenue, leading one to the ultimate question: why not just watch that film as opposed to a hokey dramatization? David’s story started in 1993, when Melissa Coles (Dawn Long) got pregnant in high school. She pondered abortion, but ultimately went the adoption route. David was taken in by Jimmy and Susan (Kirk Cameron and Rebecca Rogers Nelson), a Christian couple who gave him a wholesome upbringing in suburban Louisiana. The film opens with David (Raphael Ruggero) turning 18, and his biological mother and father now have the legal authority to try and make contact with him.

David’s roly-poly film-geek friend, Nate (Justin Sterner), decides to document David’s journey in discovering who his true mom and dad are by way of his iPhone. Melissa is now married to Shawn (Alex Kendrick, a character in search of a purpose), while Brian (Lowrey Brown), his dad, has to break the news to his dainty, understanding wife that he indeed fathered a child 18 years ago.

Lifemark is astonishingly conflict-free. The writers render David a blank slate of a human being, whose feelings towards his biological family boil down to “do they ever think of me?” David would be justified if he held a grudge. He’d be justified if he were the least bit angry. He’d be justified if he had any emotion other than impossibly neutral — especially after his promising wrestling career abruptly ends thanks to a freak spinal condition. When filming this spur-of-the-moment documentary, Nate more than once has to implore his friend to show some kind of emotion. David’s frustrating lack of characterization lessens any connection to this material.

As if to supplement his absence of personality, Lifemark lays every emotion on thicker than a bowl of oatmeal. The aesthetics are artificially glossy, the music is manipulative in its soft, angelic tones — any more obvious would be prying tears directly from our tear-ducts — and after the hour-mark, not one character can go five minutes without crying. This maudlin affair segues from one beatific set-piece to the next, whether it’s David and his mom going skydiving on a whim or enjoying a hearty meal as a big, happy family.

The writers also cannot figure out how they want to present this story. Despite being produced by the consistently solid Kendrick Brothers’ production company, Lifemark zigs and zags across different time periods without any sense of grace. We go from David turning 18, to his parents making the tough decision to give him up for adoption, back to present-day David giving a speech about being adopted, back to Melissa’s pregnancy, then to Susan getting the call that she’s finally going to be a mother, and so on. Kirk Cameron might be one of the lone filmmakers to be active for 20+ years in search of his first good film. This is a story that probably would’ve been best told chronologically, and likely would’ve been significantly better had it been exclusively in the hands of Alex and Stephen Kendrick.

Much was made about The Irishman‘s use of de-aging technology. I found a lot of the criticism afforded to those effects overblown. Conversely, the de-aging effects on Cameron and Nelson presented in flashbacks are downright dismal — akin to Snapchat filters. Wax figures would’ve looked more human.

Lifemark may not be as a bad as other Christian films of late, but it’s so aggressively boring that, in some ways, it might be worse. I’ve long said that a middling movie is frequently less interesting than a bad movie. Those outside of these films’ target demographic like myself, who sit through these movies for reasons we stutter to articulate, might long for the feelings they held after seeing God’s Not Dead. At least they emerged with anger, shock, contempt, or some tangible emotion other than complete apathy.

NOTE: Lifemark is in select theaters as a Fathom Event from September 9th through September 16th. A VOD release is likely to follow in the coming months.

I thought it was well done and compared to Cameron’s other efforts, much better all around.

I look at films as being a story. Yes, different films tell stories differently, but I didn’t find the back and forth in the timeline distracting at all.

I’m sure not all similar stories are as conflict-free in real life as this depiction. I’m pretty sure the producers wanted to emphasize the faith tie-in among the characters as being the unspoken “glue” that helped make the story and outcome more positive – and I didn’t see anything wrong with that. As a person of faith, I think that it does serve as “common ground” that *can* help positively in family-sensitive circumstances. Is faith a panacea though? Not only no, but hell no. But, it certainly can’t hurt.

Was it emotional? Sure. The subjects of abortion and adoption *are* among the nation’s current societal hot buttons. But the message it sends is clear – there are alternatives to abortion that should be considered more by those leaning in that direction.

Thank you for your perspective, Michael. Thank you for reading my review as well. Glad you enjoyed the film! – Steve