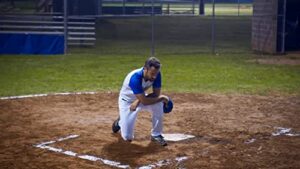 Running the Bases introduces us to the Brooks family. Sons Luke (Raphael Ruggero, star of Lifemark, also in theaters) and Josh (Brendan Carl Reimer) are inseparable, their other companion being a cute neighbor girl named Jess (Dakota Bruton). Luke and Josh play baseball together, with hopes of extending their careers into college. Josh’s, however, is cut short when he collapses on the field and dies from a heart defect. Luke has the same deformity, rendering their baseball dreams over before they begin.

Luke is justifiably shattered. Why would God take away two of his greatest loves in one fell swoop? I was enjoying Running the Bases to start. Some of the best Christian movies come when the odds are stacked against their characters and their faiths are being tested. I continued to embrace the movie when it flashed forward 20 years later. Luke marries Jess and coaches a small-time baseball team to nine championships. Enter Jamison (Todd Terry), a Texas superintendent who walks and talks like he’s Urban Meyer at Ohio State, with an offer Luke can’t refuse: double his current salary to coach 6A high school baseball.

Luke, Jess, and their son Matt (Stephen Caudill) pack up and move south. As a devout man of faith, Luke vows to coach the Parkwood Lions into better young men first and improved players second. He also wants to honor his beliefs, and his brother Josh, by running the bases at the beginning and end of every game, while praying aloud.

This is where Running the Bases — an otherwise competently executed faith-based sports drama to start — spirals downward into another armchair exercise in persecution porn. Let me reiterate: an affluent Christian man *in Texas* gets thrown in prison — alongside convicted felons and an MS13 gangmember — for practicing a religious act on city property. In Texas. The sentence comes after he peacefully protests and pays the inexplicable $250 city ordinance issued by the police following a threat from Jamison, who has some unclear plan to raise millions for an upgrade to the school’s baseball facilities. Because, you know, 6A high school baseball in a remarkably unremarkable Lone Star town has the athletic budget of the Longhorns.

As the cool kids and meme junkies say, Running the Bases had me in the first half. But in the bottom of the fifth of this egregiously long drama (137 minutes), the writing and directing team of Marty Roberts and Jimmy Womble reveal themselves to be intent on playing the annoyingly tired card that the most dominant religion in the United States by a couple dozen country miles is in fact the most at-risk for persecution. Set this story in New York, Los Angeles, or one of those “liberal hellholes” and I might buy it. Putting this in Texas and having Jamison utter something along the lines of, “I don’t know how they did it where you’re from, but here, we keep our faith to ourselves” to Coach Brooks is borderline parody.

Tis pity because Running the Bases has the framework to be as good as Home Run, or an improved version of When the Game Stands Tall. But Roberts and Womble’s decision to run with a premise fit for the next God’s Not Dead movie squanders all the interesting development it works hard to build in the first hour. Matt’s sorta-girlfriend (Isabelle Almoyan) is introduced and then totally discarded. The ballplayers themselves are starting to blossom into individuals before they return to being an interchangeable collective. The only one who emerges from the ashes of a movie that could’ve been good is Cameron Arnett, who plays a wise-old groundskeeper. The character isn’t dimensional enough to be memorable, but Arnett has that kind of voice that insists you listen when he speaks.

Ultimately, somebody had to. Once Running the Bases shows its roots as a work of empty fearmongering that goes as far as to undermine its story of resilience, it all sounds like a droning spiel we’ve seen time and time again from this sorry genre of cinema.

NOTE: Running the Bases is now playing exclusively in theaters.