Marcel the Shell with Shoes On (2022) review Marcel the Shell with Shoes On was a weird little cultural touchstone in 2010. I didn’t understand the appeal, and admittedly still didn’t as I sat down to watch the feature adaptation 12 years later. If somebody told me that a one-inch-tall cyclops shell watching himself on 60 Minutes would be one of the more moving movie moments of the year for me, I’d be as skeptical as if they told me he’d sing the Eagles too.

Cinema is full of little wins. This is one of them.

Which is why it bothers me to no end that A24 squandered the theatrical release of this film. Despite its trailer being shown in theaters before every major kids movie released in the first half of the year, Marcel the Shell with Shoes On never saw a release wider than 821 theaters. For perspective, Everything Everywhere All at Once peaked at over 2,200. Maybe the usually forward-thinking team at A24 was so blown away by the success of that film that they found themselves missing the sandbox for the mollusk on this one. But there’s no doubt that they left money on the table after spending months informing the public of the film’s imminent release only to give a good portion of America no opportunity to see it on the big screen. 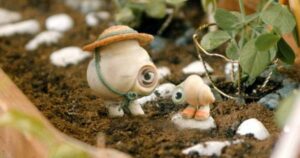 In 2010, comedian Jenny Slate and director Dean Fleischer Camp came up with the idea of Marcel the Shell whilst they were bored at a wedding. Marcel is a diminutive shell, voiced by Slate with a raspy falsetto, complete with one eye and bulky clodhoppers. He successfully became a viral sensation on YouTube that same year. The original short film eventually led to two more along with a bestselling book.

Now we have the film, which finds a newly separated filmmaker named Dean (Fleischer Camp) moving into an Airbnb and discovering Marcel (Slate) and his grandmother, Connie (voiced by Isabella Rossellini, delightful with her grandmotherly cadence). Marcel once belonged to a colorful community of shells, but unclear tragedy rendered Marcel and his grandmother the sole survivors of their flock. Dean takes a liking to Marcel, who is humble to his core yet entranced by the great big world around him.

Since film is all he knows, Dean makes a short film about Marcel and uploads it to YouTube, where it’s watched and enjoyed by millions. Suddenly, Marcel has many fans, yet he still yearns for the family who isn’t by his side to relish in his newfound stardom.

Shot in mockumentary style, Marcel the Shell with Shoes On isn’t a mediation on going viral. And no, the titular mollusk isn’t afforded the same fate as Danni Sanders in Not Okay. Instead, it tiptoes into your soul, just like Marcel, who uses a hollowed-out tennis ball as a means of transportation around his home. He can’t sit and scroll through internet comments all day either. He has a grandma to take care of, and he shudders at what he will do when she’s no longer around. 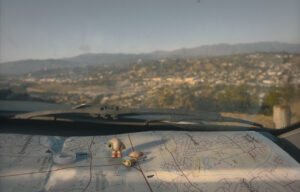 Sort of like the beloved Paddington movies, Fleischer Camp’s movie opines how much better the world would be if it were a little kinder and gentler. If we were kinder and gentler to one another, genuinely so. It also examines Marcel’s very real fears, perhaps PTSD, after being displaced and left alone, the smallest thing amidst towering surrounding. He’s slightly unnerved by suddenly being an internet celebrity. He just wants to find his family. Which prompts Dean to make an attempt to get his story noticed by Marcel and Connie’s biggest idol: Lesley Stahl of 60 Minutes, in one of the strangest yet most heartwarming scenes in any kids movie this year.

Fleischer Camp — who co-wrote the story with Slate, Nick Paley, and Elisabeth Holm — and his team work wonders in amalgamating the stop-motion animation on the shells and the live-action setting around them. Marcel’s whispery voice and Dean’s infrequent instructions and commentary dial up the mockumentary feel of this production. The entire film has such a good-natured aura about it that it makes for a quiet and moving 89 minutes.

Marcel the Shell with Shoes On is indeed a children’s movie, but I’m not sure how many will fully embrace it. It’s definitely a product of A24’s brand insofar that it delights you with the promise of familiar tonal territory until it throws you for a loop with a lot of heady, existential musings. The great news is that the quartet of story/screenwriters approach all these topics carefully but not timidly, rendering this an earnest package that will prompt smiles, fuzzy feelings, and maybe even tears (of sadness and happiness). Admirable is a work so universal in both its themes and appeal. Who else to pull that one off but a one-eyed shell?

NOTE: Marcel the Shell with Shoes On is now available to rent across multiple platforms.