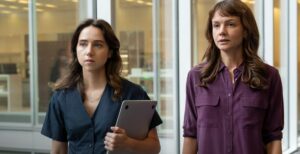 Kantor and Twohey’s masterful work of thorough investigative journalism had a domino effect on a global scale like never before. Their carefully curated and researched bombshell prompted several other high-profile men, across numerous industries, to be outed for similar wrongdoings. The number of women, both famous and not, who felt compelled to tell their stories of sexual harassment after years of silence, is a figure too high to count. The “Weinstein effect” was and still is incredibly real.

Now comes She Said, the Hollywood dramatization of how it happened. When posters for the film first started appearing at my local multiplex, I couldn’t help but feel most moviegoing masses were simply not interested in seeing this still so-recent story be re-litigated. Not to mention, in their eyes, re-litigated by the very same people who likely helped, directly or indirectly, enable such behavior to persist for decades. With famous shitty people still getting called out for being shitty people on such a regular basis, the question in the common person’s mind must be something like this: why pay hard-earned money to go to the cinema and spend two hours reliving this debacle when I can simply turn on cable news and see something very similar?

All that being said, She Said is worth seeing. It’s another enlightening film about the unglamorous legwork that is the journalistic process. It’s uncommonly empathetic to the very real women it profiles — the same ones who put their careers and personal lives on the line to dethrone a monster of a human being, unfit for even the hottest corner of hell. Its approach to the material might not entertain everyone, but it’s still a story worth telling, and one that is told effectively.

Kantor and Twohey are played by Zoe Kazan (The Big Sick) and Carey Mulligan (Promising Young Woman), respectively. She Said attentively details the women’s personal lives as much as it does their own process of putting the facts on the page. We see a working mom in Kantor try to balance her children’s fledgling lives with a husband whose father is sick in Florida. We see Twohey battle the fog of postpartum depression. As a result, their husbands take on the role of being the dutiful, supportive spouses; usually, the shoe is on the foot of the other sex.

When not in the massive offices of The New York Times, working alongside their patient copy editor, Rebecca Corbett (Patricia Clarkson), or their executive editor, Dean Baquet (Andrew Braughter), Kantor and Twohey are running all over the city (and the world) trying to secure meetings/calls with various individuals. The first is Rose McGowan, who got the ball rolling on blowing up this entire disaster by coming forward about her experience as a 23-year-old actress. Then it’s Ashley Judd, Gwyneth Paltrow, and other individuals like Laura Madden, Rowena Chiu, and Zelda Perkins, whose experiences torpedoed their lives faster than the masses could learn their names. Perkins is played by Samantha Morton, who is at the center of one of the film’s best scenes. Zelda agrees to meet with Kantor to discuss her experiences working for The Weinstein Company. She ignites a whole other fire by revealing the settlement she was presented, one designed to gag the victims and let the abuser(s) walk away unscathed. You can’t take your eyes off Morton in this sequence. 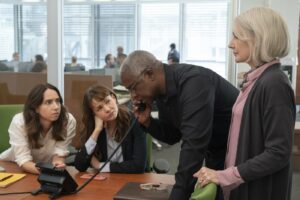 She Said is phenomenally acted all around, with Kazan and Mulligan turning in career-best performances, mainly because you see past their stardom. They shed whatever recognizable qualities they have to their best abilities, and become two working moms whose expose snowballs into a massive story with many moving parts. I was also taken by Andre Braugher, who embodies everything an executive editor should. His quiet yet booming voice is like God’s to a newsroom. His stature is like a wall of security whenever he’s in a room with his loyal reporters. Peter Friedman also turns up as Lanny Davis, a legal operative assigned to speak on behalf of Weinstein. His “we can work this out” attitude comes off as charm, but not enough to disguise the underlying slime. He’s excellent in his scenes.

Even as someone privy to films about journalism, I can attest to the fact that the bulk of She Said boils down to a lot of traveling and phone-calls. There’s a favorable level of suspense in this for some, but it might be a patience-testing endeavor for others. Hansjörg Weißbrich’s editing does wonders in pacing this film like your average thriller, yet it only goes so far in downplaying the monotony.

Teased early into the film is the idea that this story will be equipped with a takeaway about a system that enables men like Harvey Weinstein to continue to rein over massive corporations and take advantage of subordinates. She Said begins by insinuating a connection between Weinstein and Donald Trump — specifically, during the flurry of sexual assault allegations levied towards the former president in one of his billion controversies. Constantly proposed by many victims is the idea that Weinstein is a symptom of a much-larger institution that enables men like these to grow their unchecked power, and consequently, their ability to commit inappropriate and downright loathsome behavior. The film fails to drive that idea home. 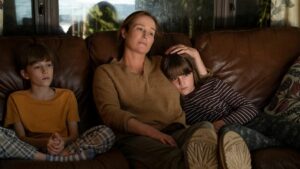 This was absolutely a story that needed to be told by women to be truly effective. Director Maria Schrader, and screenwriter Rebecca Lenkiewicz, establish a lens of empathy and tenderness that permeates this film from start to finish. It’s seen subtly at times and overtly at others: such as the way the camera fixates on the victims and doesn’t interrupt them when recounting their experiences, letting details breathe; or when Kantor and Twohey are approached by a cad at a bar looking to make a move on them. You get the feeling every woman involved with this film has their own personal horror story that would be fit for its own separate movie, simply in the way they delicately yet assuredly handle the material.

I suspect that most who show up to see She Said, or those who give it a watch down the road, will enjoy it on its merits. Especially those who enjoy films like Spotlight, The Post, and the like. But I cannot fault everyday people for flat-out ignoring this movie in the present. Make and release She Said 15 years from now, and the results might be different. Again, this is a story worth telling. However, like the tree in the forest, if an important movie is made, and there’s nobody willing to see it, does it even exist?

NOTE: She Said is now playing exclusively in theaters.