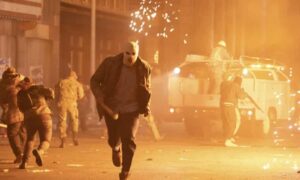 The Forever Purge is like a skilled marksman ready for World War III: it don’t miss. Perhaps boasting the strongest band of characters since the series began, it shows an irreparably broken America with misguided beliefs and values. These movies always had a glimmer of optimism even at their most violent. This one is brutally nihilistic. And justifiably so.

How many film franchises can you say utterly dropped the ball with the first installment and proceeded to (mostly) course-correct with the remaining four? I stand by Anarchy and Election Year taking this high-concept thriller to the heights necessary to make it politically dense yet narratively compelling. You can take or leave the prequel we got three years ago, while the TV series thoughtfully expanded the idea of a 12-hour crime free-for-all. The Forever Purge is said to be the final installment (at least until the obligatory reboot five years from now), and after some bumps, it’s good to see a worthwhile series conclude with a strong finale.

Series-mainstay James DeMonaco loans directing duties to Everardo Valerio Gout (Snowpiercer) in his debut feature despite still writing the script for this installment. Crossbreeding neo-Western styles with that of an urban survival thriller, it opens with the Mexican immigrant couple of Juan (Tenoch Huerta) and Adela (Ana de la Reguera) fleeing cartel violence in their homeland for sanctuary in Texas. Juan finds work on a local ranch while Adela takes a job at a meatpacking plant.

Despite the New Founding Fathers of America (NFFA) abolishing the Purge, it still continues in these parts, only this time, a cluster of white-nationalist militias have plans to keep it going beyond the grace-period. The militias invade with the intent to “purify” American society. I doubt you need much of an explanation there. Juan and Adela wind up joining forces with a wealthy rancher Dylan (Josh Lucas) and his pregnant wife Cassie (Cassidy Freeman) in order to make it to Mexico, as the country has (ironically) opened its borders to Americas seeking asylum from a country overtaken. It has gotten so out of hand that even the NFFA are trying to stop “the Forever Purge” from happening, although their impact is minimal given the monster they’ve helped create.

One need not squint too hard to see the parallels to last summer’s riots as well as the unconscionable storming of the Capitol in the early days of 2021. Previous films have shown everyone from gun-nuts, part-time snipers, and Paul Kersey-esque vigilantes taking part in the annual event. In The Forever Purge, DeMonaco takes it a step further and shows the result of a government that condones violence-for-the-sake-of-violence. Seeing as the Purge has revealed itself to be federally sanctioned ethnic cleansing, is it really shocking to witness a neo-Nazi fascists rise up and self-extend the window for disorganized crime?

The parallels with present day America remain on-the-nose, most obtusely in dialog. It’s made abundantly clear from the beginning that Dylan doesn’t like Juan, who is employed by Dylan’s father. Juan assumes it’s because he’s Mexican and is excelling at the cowboy life. Dylan clarifies that he doesn’t harbor hatred towards any group but believes that people should remain racially segregated to create fewer problems. “Well, we’re together now,” Juan says as the two sit defensively in a vehicle as all hell breaks loose around them. Reguera’s Adela is a easy to like, having learned combat based on years of being entrenched in the cartel, but DeMonaco’s script tends to turn her into a superhero in both recovery time and one-liners. That kind of monkey business offends me more than any attempt at political commentary, regardless on what side of the aisle it falls.

Say what you want about The Purge movies. Lord knows I have over the last nine years. It remains astonishing that a mainstream American franchise has been steadfast in revealing the toxic impulses of a country divided, to the point that as the years progress, something like the Purge coming to fruition — at least in a fringe sense — wouldn’t be the most shocking development in this country’s 245 year history. The Forever Purge concludes the series on a high note, albeit a bleak one, with a dash of irony to tie together a beautifully complicated package.