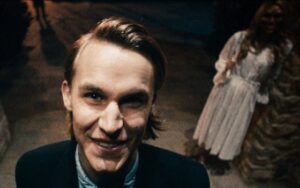 The Purge exploits its home-invasion, pot-boiler suspense fully but leaves opportunities for exploration of political allegory – as hinted in the trailer – conveniently untouched. When you have a premise as good as this one, make it appear to house commentary about the political and social spectrum that is America today, and you opt for a carbon-copy thriller, that is something of a cinematic sin.

The film sets up 2022 America, “a nation reborn,” so they say, thanks to a social policy called “The Purge.” The Purge is a twelve hour event, one night a year, where all crime is legal and all emergency services are suspended. This gives people an outlet for all the violence, anger, and rage they keep up inside them and apparently brings crime to an all time low and contributes to a flourishing economy. We focus on a wealthy home security developed named James Sandin (Ethan Hawke) and his wife and two children as they prep for the annual Purge in their luxurious mansion, equipped with Sandin’s fine security system. Shortly after the alert is given, James’ son Charlie notices an injured man, appearing homeless, is running out on the streets screaming for help and assistance. Charlie disarms the system, allowing the man to come in, before James safely arms the system again.

It isn’t long before a group of Purge-preppers, lead by actor Rhys Wakefield, who is tremendous here, show up, demanding they let the “homeless swine” out of the house so the gang can kill them and rid the streets of their kind. Failure to comply on the Sandins’ part will result in their security system being dismantled and their lives taken from them through blunt-force. The masked-preppers cut the power and patiently wait while the Sandins’ decide what to do.

A slew of the film’s details go unexplained. Why do the criminals need masks when it doesn’t make a difference if they’re discovered or not since the crime goes unpunished anyway? Also, how does the national crime rate go down to untold lows just because one night a year for twelve hours the population is granted total impunity? Does gang violence, drug warfare, and robberies cease to exist just because of this? If James’ security system is so damn fool-proof why doesn’t it have a child safety lock so little impulsive children don’t put their entire family at risk by setting off the alarm? Why do the preppers themselves camp outside and wait for one homeless man to come out of the house when they’re wasting precious hours ridding the streets of more invaluable swine? And what brain-dead congressman/government official decided the brilliant way to cut down on national crime would be to implement something as unlawful, dangerous, and as stupefyingly hazardous to the peace as the Purge anyway?

It’s frustrating to see such a potential-ridden opportunity stoop down to nothing but an outlet, or a fix, for dime-store entertainment. It takes about thirty or forty minutes to realize that The Purge doesn’t care about establishing conversation or invoking originality through its clever premise; all it wants is to have its audience members watch a dreary home-invasion, survivalist thriller that squanders potential faster than you can enable James’ security system.

The ending all comes down to a relentless brawl between good, moral souls vs. bad, amoral souls in which the sequences of brutality are almost entirely incomprehensible thanks to poor lighting and choppy editing. The film becomes utterly relentless, not in terms of violence, but in terms of style, which is to obscure everyone and everything so much that the only thing audible enough to be distinguished is a shotgun blast. I would’ve rather been able to read The Purge as a political statement on the violence of humanity and mankind, or even a social critique about our “inherently violent” nature and further justification on why the Purge is a good idea after all. I expected too much from a mainstream film by Platinum Dunes.

Everyone who acts here is adequate, with the exception of Rhys Wakefield who is simply brilliant, and the tension at the beginning of the film is some of the best of this year. But all of it is encapsulated in a film that simply doesn’t have the depth or element of surprise to contain it all efficiently. One of my jobs as a film critic is to give audiences other films to seek out if the film in question isn’t too great and my substitute recommendation is The Trigger Effect. Like The Purge, it’s a film that questions your ethics and your behavior in times of sheer camaraderie and blunt uncertainty, but it also delivers more on the levels of character and tension, along with becoming more than a home-invasion thriller as The Purge falls prey to. It’s your choice on how you want to spend your evening. If you’re looking for a topical discussion on the idea of allowing citizens to run lawless in the streets for twelve-hours a year, than you have all your talking points by watching the two and a half minute trailer.