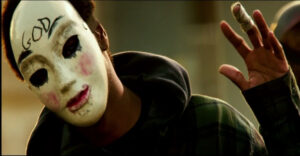 It was, admittedly, very difficult to disguise my massive disappointment with James DeMonaco’s Purge just a little over a year ago, as I excited the theater deeply unsatisfied and underwhelmed at what I thought would be the most stimulating and thought-provoking thriller of the year. The film had a premise all its own, about a nation reborn thanks to a twelve-hour period of time, once a year, where all crime – including rape and murder – were legal and could be committed freely amongst people in an inconsequential manner. However, rather than focus on the chaos and the cacophony of madness just right outside, the film turned out to be a cheap and unremarkable home-invasion thriller, set from the perspective of a family who had the means to protect themselves during these treacherous times. It was like watching a social revolution from your mansion, overlooking a gigantic mountain through your tattered blinds and was about as fun as that sounds.

The Purge: Anarchy, just from the trailers, looked to be not only the kind of film that would greatly improve upon its lukewarm but uncommonly ambitious predecessor, but also give audiences what they thought they were getting when they bought a ticket to see the original Purge film. I come confirming my judgments every time I saw the trailer in the theater; The Purge: Anarchy is a wonderful execution of one of the most original and frightening premises I’ve heard in this new decade. A tense, alive thriller and a well-acted display all the more, the film is also rich with commentary and thought-provoking drama and ideology surrounding the purge and bears an impact long after the lights go up.

During the introduction of the film, we meet again, mere hours away from the commencement of the annual Purge, as I just explained above. We are following three distinct groups of people, all the while interjecting into lawless rats just waiting for the announcement to come across the loudspeakers and the sirens to ring so they can unleash hell upon this nation reborn. One is a young couple (Zack Gilford and Kiele Sanchez), on the brink of separation, taking back-routes, avoiding highways, just trying to get home to their sanctuary before all hell breaks loose. Another is a mother and daughter duo (Carmen Ejogo and Zoe Soul), who live in a low-income area, one of the many ones targeted by Purgers. Finally, we have the enigmatic Sergeant Leo Barnes (Frank Grillo), an attractive man riding in a bulletproof Mustang, who is clearly seeking some form of vengeance on this night.

This group of people come together when the mother and daughter duo find themselves about to be victim to a man in a heavily-armored car with a turret, once the Purge commences. Leo steps in, after spur-of-the-moment contemplation, and shoots up their attackers before finding the young couple inside his car begging for a ride. The five are now in this together, looking for some brief form of refugee away from the violence, but one with unfinished business to take care of; the main objective now becomes survive the night, avoiding any and all kinds of lawlessness while desperately trying to keep everyone close and out of harm’s way.

The film lives up to its title in the regard that the film’s pacing stays consistent, never slowing down and never coming down to a grinding halt to let some unexpectedly boring bout of moralistic integrity play with the characters. The film remains a worthwhile riot, quite literally, using its solid array of actors (especially Grillo, who is captivating and mystifying as the main lead in the film). Not to mention, The Purge: Anarchy rights one of its predecessor’s biggest wrongs, which is identifying why the Purge allegedly reduces crime rate, why it allegedly lessens unemployment, and why it has allegedly been successful, along with its New Founding Fathers. It does all this by introducing a thoroughly interesting group of rebels, who work to combat the Purge and all it stands for, run by its humanist leader, who believes The Purge is just an event to eliminate the poor and help the wealthy increase their capital and their egos.

Consistently, writer/director DeMonaco ushers in new ideas, zealously welcoming many different aspects of what could happen in a usually-populated downtown area during this psychotic night, while leaving (most likely purposefully) numerous ideas unexplored. Just the last twenty minutes of the film could be used as the building blocks for another screenplay revolving around this twelve hour escapade. I would be interested in seeing three or four more films exploring this idea from different perspectives – the wealthy, the homeless, gang-infested areas, and so forth, for The Purge idea still feels extremely unexplored, even with two films directly catering to the idea.

The Purge: Anarchy finds the rare and often blurred crossroads between extremely graphic violence and social commentary, satisfying parties who came for the carnage and the parties who came for the insight. Unlike many films with sizable ambition, the film goes for broke, and as a result, succeeds because it has clearly thought about this idea and its impact, and creates one of the tensest pieces of film the year 2014 has yet to see (keep in mind, all this was erected from one of 2013’s most lackluster and disappointing films).