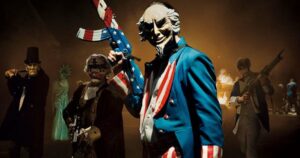 Whether you like it or not, accept it or deny it, James DeMonaco’s massively and unexpectedly successful Purge franchise has become one of the best sociopolitical critiques in American film of this century. It’s a look at many things, from income inequality, America’s obsession with violence, its love and fixation with guns and violent weapons, and a culture that can relentlessly murder people during a government-sanctioned period of twelve hours before operating like nothing ever happened upon the next sunrise.

The constant in all The Purge movies is that the government officials – the current American political party known as “The New Founding Fathers of America (NFFA),” particularly – were exempt from the Purge. In Election Year, following controversy with the NFFA President incumbent Earl Danzinger (Tony Serpico) being challenged by Senator Charlene Roan (Elizabeth Mitchell), who is running as an independent on an anti-Purge platform, the protection of top government officials during the twelve-hour Purge, where all crime, even robbery and murder, is legal, is revoked. Senator Roan – who was the sole survivor after her family was viciously slaughtered many Purges ago – agrees to stay in the densely populated city during the Purge to continue to prove and follow her ethical, anti-violence platform and not accept any kind of evasive or sanctuary privileges outside of bodyguards.

However, when one of Senator Roan’s bodyguards betrays her, allowing a band of heavily armed, neo-Nazis in to infiltrate and attempt to kill her, which would all but assure that Danzinger would win the election and the NFFA would still hold power in the U.S. Senator Roan winds up being heavily protected by Leo Barnes (Frank Grillo), the same man who took prominence in The Purge: Anarchy, and the two spend the night navigating the dangerous streets attempting to stay alive.

Eventually, they cross paths with Joe Dixon (Mykelti Williamson), a local business owner staying up all night, heavily armed on his rooftop, to protect his uninsured grocery store from looters so he can continue to make a living. Staying close to him is a young immigrant named Marcos (Joseph Julian Soria), who is also an expert at handling firearms, in addition to Laney Rucker (Betty Gabriel), who spends every Purge circling the neighbor in an ambulance assisting the wounded.

Leo’s determination to protect Senator Roan at all cost comes out in his skepticism with anyone who is not Senator Roan, as he tirelessly works to make sure she’s safe and out of harm’s way. In many ways, she is the last hope for a safer, better America. The NFFA’s rein has long been predicated on violence as a way of maintaining the nation’s purity and as an act of cleansing the populous. The Purge is something that effects everyone in some way, but mostly the poor and, often times, defenseless, which causes many low-income individuals to be murdered and their neighborhoods to be destroyed. This topic was explored heavily in Anarchy but retains its relevance in Election Year.

The Purge: Election Year also retains the incredible entertainment value of its predecessor and the scares and thrills of it, as well. This is a fundamentally terrifying series, predicating itself upon an idea that is fleshed out well enough to seem eerily plausible. Writer/director DeMonaco has nursed this franchise from the beginning and has made it blossom into a detailed and exuberantly refined series right down to the strange, disturbing specifics. Consider a sequence that shows a news story covering America’s influx of “murder terrorism,” where people from Europe, Belgium, and Denmark travel to America for the Purge to take part in the murderous antics that largely make up the evening.

This film is as detailed as it is tense, building upon pragmatic, believable circumstances, and laced with the rational fears of the American people on a night like the Purge. The Purge: Election Year is rumored to conclude the trilogy, but this is one of the few franchises I’d love to see continue to thrive and focus on more angles and perspectives during this twelve-hour period of terror. DeMonaco’s baby has grown into a bold, confident, unbelievably entertaining staple and piece of social commentary.