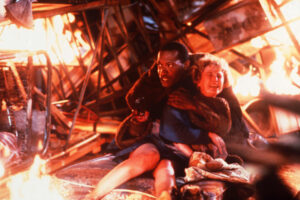 It continues to aggravate me whenever I finally watch a film I’ve been told for many years was great only to see for myself that it is indeed great, many years too late.

That’s the case with Bernard Rose’s Candyman. The titular figure — played by long-time horror movie icon Tony Todd — is a well-known legend who feeds off the fear and cocksure behavior of skeptics. Two of those happen to be Helen Lyle (Virginia Madsen) and Bernadette Walsh (Kasi Lemmons), two grad students at the University of Illinois collaborating on a thesis regarding urban legends. From a woman named Anne-Marie (Vanessa Estelle Williams), they learn about Candyman, an African-American figure with an oversized coat and a hook for a hand, who is believed to be responsible for a recent murder in Chicago. Candyman’s origins stem from the Cabrini-Green housing project on Chicago’s Near North Side (demolished in 2011).

The Candyman is a towering supernatural being, known for haunting and killing those who dare summon him out of skepticism. He’s summoned when someone stands in front of a mirror and utters his name five consecutive times. When you stop and consider similar urban legends, Candyman’s approach isn’t all that insane. Those bold enough to stand in front of a mirror in effort to summon him possess a degree of incredulity; as if they’re hoping to turn to their friend standing near them and say something to the degree of “see, nothing!” after the fact.

In one of the film’s most accomplished scenes, Helen and Bernadette venture to Cabrini-Green, where Candyman is believed to live on an upper abandoned floor. From the moment they park their car, the two women are heckled by the projects’ occupants, who suspect they’re cops. They confidently walk as if they know exactly where they are going. If you’re from Chicago, you know how notoriously violent and disenfranchised of an area this was at the time. The two women are actively bypassing real danger and looking past living, breathing injustices in search of imaginary horror. Or so they think.

Being stuck in a rut of a marriage to a philandering professor, Helen throws herself into her research. Despite hopes she’d have the legend debunked rather swiftly, she’s stunned to see locals’ testimonials on Candyman mesh with real-world events. Soon enough, she finds herself Candyman’s latest target. Then things get bloody. Helen starts waking up in the middle of crime-scenes that have her drenched in blood and looking guilty as sin, soon leading her to being institutionalized, haunted by the unexplainable.

Adapted from a short story by Clive Barker — which was greatly reworked by Rose, who serves as writer — Candyman feels singular enough to stand on its own as a bone-chilling work of multiple genres. I hesitate to call it a slasher despite the copious bloodshed. It operates on a tonal plane foreign to most comparable works. Candyman isn’t in the same league as Freddy Krueger or Jason Voorhees no matter how much you want to convince yourself. Rose incorporates gothic elements into the appearance of the picture and ramps up the psychological undertones. One horrifying moment comes when Helen awakens on the floor of her friend’s apartment, doing snow angels in blood with a stained butcher knife in her hands. The agonizing screams are enough to pierce your mind and psyche. Rose makes sure every death has weight to it, if for no other reason than we must witness Helen being confined to an asylum and eventually strapped to a table with one dose of this and another dose of that to subdue her frantic mind.

Candyman unnerves with both bloodshed and its themes, which incorporate Black plight and the idea that urban legends might as well be deemed true if collective group-think is strong enough. The film wouldn’t work if the cast wasn’t so strong; Madsen and Lemmons are smarter than your average horror heroines and are given ample runway to transcend into characters. Then there’s Tony Todd, who doesn’t appear as Candyman until roughly 40 minutes into the picture, yet his presence looms throughout. When he does appear, every line he utters has a gravitas beyond the fact his voice is deepened with thunderous bass.

Good horror films excel at one thing. It’s the great ones like Candyman that prove that the genre can handle multiple elements at once. In this case, a parable on racism with added folklore, tied together through well-executed fundamentals.