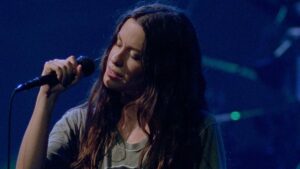 Alanis Morissette’s album Jagged Little Pill still slaps to this day. Beyond being a pivotal entry in the rise of alt-rock in a post-grunge musical landscape, it’s littered with shout-along crescendos that beg you to belt. Furthermore, it’s tied together with an instantly recognizable feeling of youthful rage that transcends gender. One could only make an album this timeless if they were unapologetically themselves. You don’t have to squint to see that Alanis is authentically her own person, if for no other reason than she couldn’t imagine trying to be somebody else.

Picture this: a Canadian teenager went from being an 80s pop star — donning loud hair and acid-washed jeans — to being the voice of Gen Xers through loud yet reflective rock tunes. And she did it all without the explicit interference of record companies insisting they knew what was in her best interest. Go look at photos of Alanis in the early-to-mid-1990s. Her hair covers her face more often than it doesn’t. Her clothes look like whatever she happened to tug off a hanger that morning.

She looked like someone who would sing songs by an artist named Alanis Morissette into her hairbrush while getting ready for school.

Now here’s Jagged, the second entry in HBO’s new “Music Box” documentary series, giving high-profile artists/musical events the 30 for 30 treatment. Director Alison Klayman sits down with Alanis and a handful of her peers, former bandmates, and collaborators as they articulate her stratospheric rise in the industry as well as the making of her album, Jagged Little Pill. The 1995 opus has sold more than 33 million copies worldwide, making it the second best-selling album ever by a female artist (Shania Twain’s Come on Over with its whopping 12 singles remains number one).

After appearing on Star Search and the kids-centric sketch-comedy program You Can’t Do That on Television, Alanis found herself thrust into the world of writing, recording, and performing. Recounting it all is a lot for her. “I’m gonna need some help because I never talk about this s***,” she candidly confesses at one point. Throughout the documentary, however, she seems herself. She’s got that exuberant charisma you can’t fake with the right amount of self-deprecating deadpan that cuts through the glitz and allows her to retain her relatability.

Jagged Little Pill co-writer/producer Glen Ballard is offered the most screentime second to Alanis. Both him and Guy Oseary — the former executive at Madonna’s Maverick Records label, opine about how they knew Alanis’ third album was going to be a monstrous success. After her cutthroat, rage-filled anthem “You Oughta Know” hit the airwaves of the massively influential Los Angeles radio station KROQ, the studio’s phone-lines lit up with callers demanding more before the song’s premiere had even concluded. Then came the reassuring counterpart “Hand in My Pocket,” which featured Alanis’ confidently bragging about the contradictions in her personality that made her appear more human.

And who could forget “Ironic?” One music critic/fan comments how over the years (and even then), the debate over the linguistical use of “irony” in the song has overshadowed the vivid imagery in the songwriting. For a second, just picture the devastation of “rain on your wedding day,” or how Alanis’ glass-shattering voice elongates those words for power. Consider the sight of 10,000 spoons “when all your need is a knife.” I’m the biggest tickler-stickler when it comes to grammar and even I couldn’t give a damn if all her examples are in-line with irony, coincidence, or simply unfortunate circumstance. It’s a song that begs you to sing-along, and if you’re not careful, contemplate.

Providing us with amusing asides are the likes of Taylor Hawkins, Alanis’ drummer on her 18-month global tour, who would later join the Foo Fighters. Also a part of that crew was Jane’s Addiction bassist Chris Chaney. Garbage lead singer Shirley Manson chimes in frequently, emphasizing just how important Alanis’ rise in the music industry was to countless women, particularly those who predicated themselves on confessional singer-songwriting. Jagged probably wouldn’t be complete without a couple appearances by Kevin Smith, who you might recall cast Alanis as God herself in Dogma. While rummaging through storage, Alanis picks up a DVD copy of Smith’s film and recalls how it helped her with “Post-Catholic stress disorder.”

Jagged is sometimes disappointingly linear, from a structural standpoint. It’s your typical talking-head window into a massive musical touchstone. Klayman introduces at least lets Alanis’ songs breathe through lengthy snippets. She implements some style by having the lyrics appear on-screen via handwritten cursive, drawing attention to the songwriting. It’s a gentle touch. Sadly, there are few revelatory moments to be found. Alanis mentions the need for therapy and how she was taken advantage of at the tender age of 15-years-old. You get the feeling chunks of those conversations are missing.

The copious praise heaped on Alanis, her breakthrough record, and her everlasting impact only makes her recent denouncement of the film and Klayman that much more mystifying. In a lengthy statement ahead of the film’s debut at the Toronto International Film Festival, Alanis said: “I sit here now experiencing the full impact of having trusted someone who did not warrant being trusted.” She never clarified what moment(s) breached her trust. Perhaps it’s the absence of her family. They’re mentioned early on only never to be addressed again.

Imagine, if you will, a documentary about Alanis Morissette that is glowing in its regard for her and her profound legacy only for her to completely shun it as if it doesn’t exist. Isn’t it ironic?