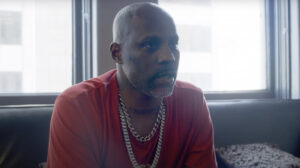 “We scraped our knees on these m***********’ streets,” DMX tells a group of Yonkers natives who stand on the very same block he once did many decades ago. “I stole a car right here,” he follows-up, with a large group of onlookers entranced by his street-side sermon. One young man — who we can believe is not foreign to many of X’s own experiences — can’t help but sob while listening.

Later, DMX is talking to kids at the same developmental school he once attended, appearing nervous, but still speaking from the heart. We see a man with all the money in the world, yet still harboring a sense of due diligence to maintain his roots and inspire those who ritualistically bump his music.

Christopher Frierson and Clark Slater’s new documentary DMX: Don’t Try to Understand is made all the more tragic given the inevitable conclusion we know is coming. No less, it’s remarkably moving, and its ability to uplift is immeasurable.

Part of HBO’s “Music Box” documentary series — created by Bill Simmons, the same man responsible for ESPN’s 30 for 30 — Don’t Try to Understand started as a simple window into the life of one of hip-hop’s loudest voices of the 1990s and 2000s. And then, when Earl “DMX” Simmons died in April 2021, it inadvertently became something more poignant. The final glimpse into a man who endured so much pain in his life that barking, both figuratively and literally, seemed to be the only response. The fact that Frierson and Slater don’t try to draw attention to the finality of the wealth of moments within this documentary makes it all the more authentic. They know that we know what happened. Instead, they focus on what we should be so grateful to see. And what we’ll ultimately remember.

Don’t Try to Understand follows DMX upon his release from prison in January 2019. A handful of cameras and family members greet him from the moment he walks out to the parking lot. From there, it’s almost exclusively business. He hits the road for his “It’s Dark and Hell is Hot 2019 Tour,” named after his 1998 debut album (a must-listen). He juggles raising his toddler-aged son Exodus with his fiancée, baby mama drama, and the weight of a neighborhood, with decades of prolonged mental and physical torture ingrained in his psyche. And yet, X still finds time to praise God, in his personal life and at every one of his shows. The moment where he instructs a crowd to illuminate the arena with lighters, cell phones, or whatever they have and proceeds to lead them in prayer is one of many serene sequences.

X’s music takes a backseat to intimate moments that define a larger, complicated man. One that’s easy to miss comes when DMX makes an appearance at Kanye West’s Sunday Service Tour. X is a deeply religious man, and he appears to scoff at the showy, braggadocios nature of the event early on. Nevertheless, he does his damnedest in leading the crowd of mostly-young people in a heartfelt prayer. Frierson and Slater quietly inform us it’s the little things that aid in painting the picture of a human being.

Also prominently featured is Xavier Simmons, X’s eldest son, who clearly has a plethora of feelings about his father that will surely take many more years to calibrate. “Expose the places that scare you most,” he says is his mantra. It’s from there where you’ll grow the most. Don’t Try to Understand climaxes with a lengthy hug between the two men. Forget understanding. Try not to shed a tear.

Frierson and Slater take us through a lot in such a short amount of time. We see DMX shoot dice in his old neighborhood, rekindle with family over Halloween, embrace strangers, and wrestle with being jerked around on his tour. A substantial section of the third act is dedicated to him relapsing with drugs. At merely 81 minutes, some scenes end too briefly, but it’s okay. What we get is an essence that is respectful to the man who, at one point, is referred to as a “prophet” by a lifelong fan.

DMX is the poster-child of an artist whose power and contributions to hip-hop many of us surely didn’t appreciate until we saw the news that he was in a drug-induced coma, only to die a week later. Whether you still chant along to the infectious “Ruff Ryders Anthem,” know every word to “X Gon’ Give It to Ya,” or enjoy my personal favorite, “No Sunshine” (which samples the Bill Withers’ ballad “Ain’t No Sunshine”), you’re aware of his raw delivery and the personal turmoil about which he rapped. In a genre where remaining true to yourself is everything, DMX reinventing himself into a softer individual was nearly impossible. It’s a fact as sad as it is admirable. This documentary couldn’t have carried a better title.