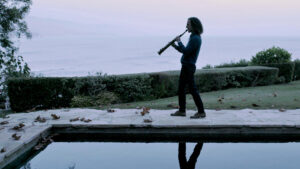 Even as someone who loves to embrace acts the masses live to criticize (Creed and Kid Rock to name a few — judge me), I myself can’t help but find Kenny G’s songs overwhelmingly thin and interchangeable. It’s quintessential “Kohl’s music” to me; music you hear when you’re shopping for new bedsheets, or God forbid socks. A big credit is due to accomplished documentarian Penny Lane (Hail Satan?, Our Nixon) for leaning into idiosyncratic territory and making Listening to Kenny G about Kenny’s ability to inspire adulation and contempt.

One thing I won’t deny: the guy is entertaining in the commitment to his passion.

Early into Listening to Kenny G — the latest entry in HBO’s “Music Box” series — Kenny demystifies his process. He believes in “hard work, practice, preparation, and…” he pauses, “the strive for perfection.” Perfection is what he seeks, as unattainable as it often is. It’s the pursuit of perfect that keeps him going. Even after selling 75 million records, collaborating with everyone from Louis Armstrong to Kanye West, and becoming a Twitter sensation as of late, he still practices for three hours. Everyday. “Could I do two? Yes. Could I do five? Yes. But I do three.” You get the feeling he could practice for 10 hours straight and not have any qualms about it.

Besides being known for the immediately recognizable “Songbird,” on top of being the most popular instrumentalist of all-time, Kenny G has been a target for jazz critics. A lot of the hate is justifiable. Here’s a white Jewish guy from Seattle diving into a genre’s that’s predicated on building upon storied history and compositions (largely by overlooked Black musicians) who makes no attempt to adhere to conventional rule. Instead, he plays it by ear, quite literally. Sure to piss off the purists — assuming they give this doc the time of day — is when Lane offers a peek at Kenny’s recording process. He makes several cuts to his compositions, redoing notes as well as splicing takes with re-recorded snippets. It sounds seamless. To a philistine like me, of course.

One critic tries to put his thumb on the intense disdain for Kenny G with a brilliant metaphor. Imagine a world where competitive basketball was second banana to the Harlem Globetrotters and their theatrical on-court performance. Fathom, for an instant, that all-time greats like LeBron James and Michael Jordan had to work part-time gigs as waiters to pay rent due to a lack of interest. Kenny G is the Harlem Globetrotters in this analogy, while people who have worked tireless hours to perfect the craft of jazz are lucky to get a sniff at places like, say, The Green Mill in Chicago’s Uptown neighborhood.

People know Kenny G’s sound, but they don’t necessarily know him as a personality. Because of this, it’s clearly a touch uncomfortable for him to candidly speak about his career in an analytical sense. But watching him retell the story of his big break — a lion’s credit goes to famed producer Clive Davis — and fuss over his latest album, it becomes apparent that he’s someone not compromised by his own pretensions. He makes music that he enjoys, and the fact that millions have made him a star appears genuinely heartwarming to him.

Kenny G even unintentionally created a new genre/format with his defiance: smooth jazz. The most interesting sequence in Listening to Kenny G is the inception of smooth jazz as a lucrative radio format. A network executive talks about the exhaustive market research his team conducted in order to make it happen. After testing 650+ songs with general audiences, nine of the top 15 highest rated songs belonged to Kenny G.

Lane’s film offers enjoyable insights into the man behind the legend and the ensuing dissent. As it turns out, most of his riches are due to his investment in a Seattle-based coffee-shop known as Starbucks. His pass-times are playing golf and flying. He’s never not mastered something he didn’t put time into learning. His commitment to being an engaged student, and consequently a committed learner, is what makes him relevant in a vastly different musical climate. A late scene shows him getting a lecture on viral social media fame. Remember that time Kanye West had him serenade Kim Kardashian while he was surrounded by roses on a hardwood floor? Yeah, he’s crushing that realm too.

Bottom-line: don’t let anyone keep you from enjoying what you unabashedly love. For as many people who speak ill of Kenny G and his stratospheric success, there are an equal number who have had one of his songs play at their weddings. He himself spends so little time on the criticism that you can believe it’s never once gotten to him. Penny Lane is one of the shining stars of the documentary world, going where the puck isn’t and choosing drastically different stories for each project. She nails it once again with this insightful little number.