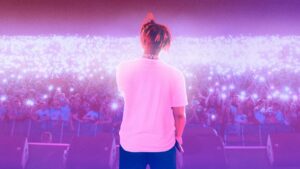 In the grand scheme of hip-hop, Juice WRLD is etched into the unwritten book for the sheer fact that he left an indelible impact with barely two years in the game. More impressively is his singles shattered streaming records and rubbed elbows on the charts with Drake and The Weeknd — industry titans with unfathomable money behind them. Admittedly, I was never a true fan, but I respected his craft. “Lucid Dreams” captivated me like it did almost everyone else.

Having been treated to more of his music than ever before, I came away from Juice WRLD: Into the Abyss in similar awe that I did Billie Eilish: The World’s a Little Blurry earlier this year. What does it say about our current climate when we have people old and young finding comfort and solace in songs that detail abject misery and pain, which suggest dying is the only remedy?

Unfortunately, Into the Abyss is perhaps the grimiest documentary that could be made about the late Chicago legend. Sloppy editing is one thing, but to show intimate footage of the 21-year-old artist’s spiral into addiction in such an uncritical way feels especially cruel. Even worse, during the documentary’s epilogue — which tells of Juice’s tragic death following a flight to a Chicago concert — not one member of his crew appears to express any kind of remorse. They just grossly detail the horror on the private flight.

I guess it’s to-be-expected from the same crop of folks who witnessed the barely legal rapper flash six Percocet pills on his tongue and wash it down with lean like it was your average breakfast.

The final entry in HBO’s “Music Box” documentary series — whether it’s for the season or for good remains to be seen — shows the life of Jarad Anthony Higgins in explicit detail. On stage and in numerous songs, he rapped about coping with anxiety and depression by way of excessive drug use. He was part of a SoundCloud rap movement known as “emo rap,” which takes melancholic lyrics and scores them to trap-style compositions. The result is the kind of music that compliments an evening diet of substances. Juice’s tragically young death wasn’t terribly uncommon for the genre. Fellow emo rapper Lil Peep died two weeks after his 21st birthday. Meanwhile, the eminently controversial XXXTentacion — who shared a lot of similarities with Juice, lyrically — was only 20 when he was gunned down.

Several songs had Juice prominently discussing his own mortality, sometimes begging for it. “What’s the 27 club? We’re not making it past 21,” he once rapped, inadvertently (?) predicting his own death.

The bulk of Into the Abyss is a look at a rapper off the rails. Juice is constantly popping pills, swilling lean (the famous Sprite/promethazine-codeine cough syrup), and snorting cocaine to the point where the project plays like trauma porn. When we’re not forced into watching a marathon of drug use, we get a glimpse at what made Juice click with countless listeners. Some of the doc’s best footage is Juice freestyling, sometimes in the studio or sometimes just sitting in bed, surrounded by his posse, including the love of his life, Ally Lotti. His ability to spit was unquestioned. He rarely wrote, often doing multiple takes with the same beat, creating drastically different songs each time until he settled on he liked.

Samples from his biggest songs are heard throughout the film. On-screen graphics quantify the hundreds of millions of times each one has been streamed. “Lucid Dreams” started it all back in 2018. A dark, heartbroken rap ballad, it still strikes a nerve from its opening lines: “I still see your shadows in my room / Can’t take back the love that I gave you / It’s to the point where I love and I hate you / And I cannot change you so I must replace you.” His fixation on his seemingly inevitable demise made him a lot like Tupac, another artist who appeared to be game-planning for his death moreso than his present career.

But Into the Abyss is so consistently joyless despite the depth of access. We see an artist not cautioned, but enabled by his peers into drowning his sorrows in an endless supply of narcotics. The fact that not one moment showing Juice being told to settle down is included in the 109-minute doc leads one to believe such an intervention never occurred. Or maybe it was so brief it was practically insignificant. The aforementioned epilogue — which is rendered somewhat heartfelt thanks to the affectionate insights brought on by the likes of The Kid LAROI and popular Chicago rappers G Herbo and Lil Bibby — shows a team so conditioned to Juice’s habits that the anecdotes they provide only appear to be missing a shrug.

Similar in the way that an artist’s catalog is pillaged following their death, Into the Abyss feels like another caustic cash-grab. It doesn’t want to celebrate a generationally impactful artist nor the rare vulnerability he exuded. It prefers to wallow in unchecked addiction and mental illness, treating it as an occupational hazard with nothing resembling a critical evaluation.

NOTE: Juice WRLD: Into the Abyss is now streaming on HBO Max.