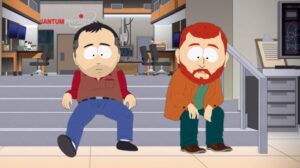 The tireless, overworked duo of Trey Parker and Matt Stone could’ve opted for a “Booster Special” as the third chapter in their ongoing South Park pandemic anthology. Instead, they do what they do best: stretch the limits and go for broke. South Park: Post COVID — the first of 14 films set to premiere on Paramount+ over the next several years — casts a doomy aura over our beloved characters as they navigate a dystopian hellscape frighteningly similar to the one in which we currently live. Unsurprisingly, hilarity ensues.

Not only does Post COVID kick off this fresh batch of South Park films with a bang, it sets the stage for one or more follow-ups to further elaborate on this framework (although, you’d be foolish to try and marry yourself to predictions about where this series will go).

Set a whopping 40 years after the events of the previous Vaccination Special, the kids of South Park are now nearing 50, completely disillusioned with their lives as the COVID-19 pandemic is finally drawing to a close. Stan Marsh is working as an online whiskey consultant (?) and entirely unhappy with his life, complete with a nagging Alexa for a wife. He’s forced to return to South Park when Kyle phones him and reveals that their friend, Kenny — now a renowned scientist — has died just as he was about to unearth some game-changing information about the pandemic. As it turns out, Kenny left his findings in a place only his closest friends will know.

I won’t even spoil what’s happened to Cartman after such significant time has passed. You need to see it for yourself.

From the looks of it, it’s rather nebulous to call this and the 13 remaining South Park projects “films.” Post COVID is merely an hour in length, and apart a color palette that bears a darker tint than most episodes, it has all the paratext of a TV movie. That’s the biggest criticism I can dole out to what is otherwise an extremely entertaining installment. By fast-forwarding 40 years into the future, Parker and Stone completely shatter any expectations, leaving us viewers simultaneously mystified and with a heightened sense of attention to detail. We must be reintroduced not only to the core four, but such staple supporting characters as Clyde, Wendy, Tweek, Craig, and Token all over again.

There’s also an appropriately gloomier color palette present. Don’t get it twisted: the film is still littered with laughs, only this time, the atmosphere is notably drearier, reflecting the personalities of the characters. Kyle has taken Stan’s place as the everyman and eternal optimist, as the once-reliable Stan couldn’t be burdened to give a damn about anything. As mentioned, Cartman is vastly different from his previous self, and only Wendy and Token appear to be leading fruitful lives. Consider this the South Park version of the Rugrats spinoff All Grown Up! except mostly everyone is downright miserable.

Although the series is set to continue, I find myself believing that this is the route South Park should take moving forward. These sporadic “films” allow Parker and Stone more time to allow ideas to marinate yet still remain hyper-current: consider Clyde’s “I’m immunized” response to being asked if he’s vaccinated a jab at quarterback Aaron Rodgers and the hoopla that occurred merely weeks ago. The dynamic duo have now hit home-runs with the last three installments. It would be wise for them to consider this as the ideal path forward.