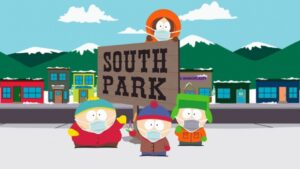 Sequels are seldom as good as originals, especially when they arrive not even six months apart. Yet as always, South Park brings a few more laughs with their spontaneous Vaccination Special.

Pleasantly different from its predecessor, it takes aim at QAnon, the notion that Walgreens and CVS are the most hopping places in the country, and the fact that old people finally have something to brag about. Perhaps slyest of all, it again demonstrates that when afforded the luxury of extra time — as opposed to six days when every waking minute feels like crunch-time — Parker and Stone can find brilliance and boundlessness in their creativity.

South ParQ: Vaccination Special appears to have a less kinetic plot than The Pandemic Special as well. It begins when Cartman and Kenny try to resurrect their “bro-ship” with Stan and Kyle by pulling a cruel prank on their substitute teacher. It prompts her to walk out of the classroom, at her wit’s end with not being in the current portal to get the COVID-19 vaccine along with her fellow teachers. When the boys realize that Mr. Garrison — fresh off his sex-change and subsequent term of being a stand-in for President Donald Trump — arrives to be her replacement, they act swiftly and obtain a few dozen vaccines from their heavily guarded Walgreens. They can’t bear the thought of tolerating Mr. Garrison any longer.

Garrison’s return to South Park has the community up in arms. But loyal conspiracy theorist group QAnon feel his arrival signifies something greater. They cling on his every word, eventually becoming alternate tutors for schoolchildren forced to exit South Park Elementary by their parents who despise Garrison. Surely the vaccine is a tool of pedophilic Hollywood elites who want to microchip the masses and make everyone content with child molestation and consuming blood from trafficked kids.

In any other context than South Park, this would be all-out lunacy. For Parker and Stone, 2020 and beyond gave them a wealth of material for a few new seasons. Consider these specials a tease for the overarching plotlines to come. As it stands, South ParQ: Vaccination Special feels leaner than The Pandemic Special, although maybe not as chock full of laughs. The QAnon crazies and political warfare is tiring to deal with in real life. It occasionally fields exhaustion here, even amongst familiar cartoon friends and with sporadic wit.

But Parker and Stone know how to keep material fresh and moving. Akin to the climax of The Pandemic Special, when Stan openly admitted his efforts to get Butters to Build-a-Bear were more about giving himself a purpose, Vaccination Special draws at least some attention to the fatigue many of us have felt throughout the last year. Certain activities don’t feel as fun anymore. Friendships and relationships have become strained. It’s as if we need more care and attention than we’ve ever needed in life. To see this played out amongst an iconic group of friends, even for belly-laughs, is nothing short of relatable.

A crazy, fourth-wall breaking climax paves the way for an ending that feels not too far away in real life. It too suggests a part three will fall upon us out of nowhere in the coming months. The teasers for South ParQ: Vaccination Special were using LMFAO and Lil Jon’s collaboration “Shots” to tremendous, retroactive effect. Here’s hoping if we’re gifted another installment in this close-to-home South Park series, we’re blasting Future’s song “Mask Off” come that time.

NOTE: South ParQ: Vaccination Special will air on Comedy Central throughout the month of March and is available to stream on HBO Max.