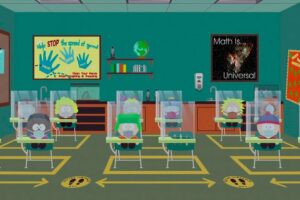 Masks. Social distancing. Economic ruin. Protests. Riots. Police brutality. Zoom meetings. Bats. No, pangolins. People who can’t be burdened to wear a thin piece of cloth over their mouths. Those who annoyingly wear it around their chin. No stone is left unturned in South Park: The Pandemic Special, remarkably the show’s first hour-long special in its 24-year run. There’s a lot of laughs squeezed into this tight production, and that’s a good thing because a few hearty belly laughs is just what we need to stay sane in these unprecedented times™.

Having not kept up with the series as intently for nearly a decade, I must express some disappointment that Randy Marsh has become the focal point of the show, and in turn, The Pandemic Special. Randy’s shenanigans were great when they were a subplot; not one of the main plot-drivers. Couple that with the show’s desire to stay relevant by being hyper-current and it lost me long ago. I relish older episodes that were predicated around the foibles of Stan, Kyle, Cartman, and Kenny. It seems of all the animated shows that have spanned three or more decades, Arthur, the long-running PBS program, is one of the few that have gotten the idea right of centering each episode around different supporting characters.

The Pandemic Special crams a lot into roughly 40 breakneck minutes. Randy decides to use the ongoing COVID-19 pandemic as an opportunity to run a “pandemic special” for his pot-farm Tegridy Farms, much to the chagrin of his wife Sharron. However, Randy discovers that he had a crucial role in the viral outbreak involving a trip to China with Mickey Mouse and a late-night rendezvous of marijuana and bestiality. Yes, it’s what you’re thinking.

Randy decides to steal the pangolin believed to be responsible for the virus from the local lab to avoid the world finding out what happened. He then comes up with the idea to lace his marijuana with some of his own DNA in effort to make South Park immune from the coronavirus. In the meantime, teachers are fearful of going back to school, so due to the South Park Police Department being defunded by the mayor, cops are now teachers in socially distanced classrooms. Cartman puts forth a valiant effort to pass off his internet connection as insufficient to avoid participating. Stan struggles with his own mental health by going too far to help Butters, who simply wants to go to Build-a-Bear as he was promised by his parents back in March.

Once again, the most empathetic and personal touches in South Park come from the boys.

Run amok are tangents about mask-wearing and President Trump’s (Garrison) apathy towards the virus and its most vulnerable victims. Perhaps in a normal year, I’d criticize this special as being overstuffed. Not in 2020. Trey Parker (writer and director) and Matt Stone — masters of their craft — are cognizant of all the bases they can/should tag, and while that might mean some of the satire squeaks by underdeveloped, seeing these characters live through a time as wacky and uncertain as ours provides grade-A relatability. You must admire all the directions this project takes with its tried and true anarchic spirit in tact.

One of my favorite moments involves everyone’s favorite punching-bag Mr. Mackey trying to conduct a Zoom meeting with parents of South Park students about reopening in-person learning. He can hardly get a word in as parents criticize the practices or lash out into personal attacks directed towards those who wear masks around their chin (“chin diapers”). Mr. Mackey resorts to muting all the parents collectively, arguably the most clutch feature one can use on any Zoom call they’ve probably had over the last seven months. Here’s one of South Park‘s long-standing sources of humor. Poking fun at the banal yet ribbing the audience for things we likely do on a regular basis.

With a global event that has left world economies in tatters and a murky path forward for all of us, this is South Park‘s time to shine. And shine they do once again with The Pandemic Special.