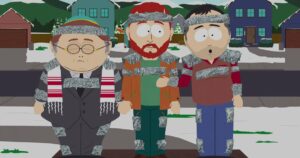 After four specials revolving around the pandemic, South Park‘s approach to COVID-19 is starting to feel as redundant as news about a new variant. South Park: Post COVID: The Return of COVID — the second of 14 planned Paramount+ “exclusive events” — has the fewest laughs of any of these spontaneous specials yet. While underwhelming, a rocky first-half is rescued by an optimistic conclusion; something we don’t normally get from Trey Parker and Matt Stone. Optimism in the land of South Park is a treat when it presents itself, and after two long, arduous years, we could use some in spades.

The Return of COVID follows South Park: Post COVID, last month’s special, which flashed-forward 40 years into the future and saw the kids of South Park well-into middle-age. Kenny had passed away after becoming a renowned scientist; Stan was a cynical alcoholic with a family in shambles; Kyle displaced his best friend as the perpetually positive everyman; and Cartman inexplicably became a rabbi. The “film” left us on a cliffhanger as it teased the reveal of a character named “Victor Chaos.”

Now, any seasoned South Park fan knew right away it was Butters Stotch, and his appearance in this futuristic version of our favorite animated locale doesn’t disappoint. Stan and Kyle need his help, since he helped Kenny develop time-traveling technology. They feel if they can travel back to the past, like their friend was planning, they can stop the pandemic from ever happening. Butters complicates things, however. He’s grown up to be an institutionalized snake-oil salesman who has made his riches convincing people to invest in NFTs. He escapes the asylum by tricking one of the guards into blowing his savings on them. “It’s gone,” he cries, “My savings, my house. But I have this little green panda on a skateboard!”

The plot would presumably take care of itself in about as much time as a conventional South Park episode, but Cartman of course has to go to great lengths to pull some shenanigans — the likes of which I won’t spoil for your enjoyment.

South Park: Post COVID: The Return of COVID does an adequate job of building upon the world erected in the previous special. It still takes amusing jabs at anti-vaxxers, the strongest one coming when Cartman assures the unvaccinated Clyde with the zinger line: “You have to be strong and stand by your beliefs. Even if it means others will die.” It also adds to the Blade Runner 2049-inspired dystopian hellscape that’s become South Park, bolstered by a doomy soundtrack and the reoccurring presence of holograms and one seriously unnerving billboard.

But for some reason, the jokes aren’t as pervasive here. Post COVID‘s humor derived from the slow-reveal of what came of the kids as they crept towards AARP memberships. The Return of COVID is far more dramatic in tone, trading humor for some unexpectedly dark undertones that squander the blackly funny satirical edge we expect. For whatever reason too, Trey and Matt simply won’t let Randy Marsh’s Tegridy Farms bit die. It’s been a played-out plot-device for too long now, even if it does contribute to the aforementioned (mostly) wholesome finale.

The reassuring news is we still have a dozen of these Paramount+ South Park specials that will see the light of the day through 2027. That’s an average of about two to three a year. There’s enough runway for the duo to tackle other subjects. But given the ferociousness of COVID-19, and how the show stays married to the current news cycle like no other, I almost fear we haven’t seen the last of this masked, quarantined Colorado mountain town. At the very least, we need a break.

Here’s to new material in the future.