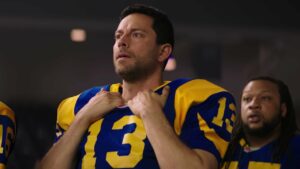 The story of Kurt Warner is made only even more special because it’s unlikely ever to happen again. Blame the ever-widening pool of college quarterback talent, or maybe more accurately, the sheer deficit of second tier football leagues (many, including the Arena Football League, have folded due to a lack of profit). Even the NFL Europe — where Warner found a brief home following his terrific stint with the Iowa Barnstormers — is viewed as one of merely few financial miscalculations in the NFL’s storied history. A triumph of Warner’s magnitude is not poised to repeat itself in any way, but as they say, stranger things have happened.

But this idea alone gives American Underdog: The Kurt Warner Story reason to exist. The only thing that made Warner’s career more improbable was the fact that he appeared to be such an aspirational figure, fearlessly putting forth his faith and remaining humble as the fame and adulation came en masse.

The Erwin brothers might’ve been the best duo to bring Warner’s story to the big screen. They’ve proven themselves to be the leaders in tastefully made faith-based flicks that do less proselytizing and more storytelling. After turning their unassuming biopic I Can Only Imagine into the sleeper hit of 2018, they found another forte in documentary filmmaking this year, with the hugely informative The Jesus Music, about the origins of contemporary Christian music. While their previous sports film Woodlawn was a forgettable, maudlin affair, American Underdog does everything just well enough to be a success. A lion’s weight of that goes to the sturdy performances the directing duo can mine out of actors both veteran and novice.

Before he was an NFL MVP, a Super Bowl MVP, and a Super Bowl winner, Kurt Warner (Zachary Levi) was a backup quarterback at Northern Iowa. Shortly after being introduced to him, he makes several attempts to woo Brenda (Anna Paquin) at a country line-dance bar. Brenda is humorously sassy but guarded. She’s a divorcée and a mother of two children, one of whom is blind. She has no time for stop-gap relationships. Warner has no intention of wasting time either. He’s got an NFL dream to chase, and in no time he realizes Brenda has to be the one by his side in order to make that happen.

After going undrafted in the 1994 NFL Draft, Warner signs with the Green Bay Packers. With a crowded quarterback room including Brett Favre and Heisman Trophy winner Ty Detmer, there’s little room for a kid from an unremarkable school. He’s cut almost immediately. This leaves him stocking shelves at a Hy-Vee grocery store, staring longingly at Wheaties boxes with Dan Marino’s likeness all over them, wondering why that’s not him. These moments are risky business in sports biopics. We know what Warner will become, and these instances offer little besides hokey foreshadowing. No less, Levi sells some of the film’s cheesier bits. And Warner would one day have his own cereal: Warner’s Crunch Time.

With limited options, and heat and gasoline not being free, Warner reluctantly takes an offer from Jim Foster (Bruce McGill), head coach of the Iowa Barnstormers of the Arena Football League. The league is a “circus” in his eyes compared to the NFL, with a shorter field, harder hits, and several different rules. But it’s football. It’s a contract. And there’s a $100/touchdown bonus. Eventually, his success with the Barnstormers leads him to the NFL — an unheard of quantum leap for any player, more-so a quarterback — thanks to the optimism of St. Louis Rams’ head coach Dick Vermeil (Dennis Quaid).

The acting sells American Underdog when the otherwise Hallmark visuals or convenient writing run the risk of undermining it. Levi excels at showing Warner’s monk-like dedication to getting his shot and proving he can nail it. He’s rendered likable because never does he blow up nor blame anyone for his failures. He just shoulders them, like all great athletes do. Anna Paquin, however, is the glue of the movie. More than the steadfast-turned-sidelined girlfriend, she demands our attention early due to her reserved nature. Paquin makes the most of her time by showing Brenda’s own dedication to her children and her dream of becoming a nurse. It’s ultimately Brenda who gets Kurt to have a closer relationship with God.

Credit to the Erwins (and co-writer David Aaron Cohen) for doing the legwork and making Paquin a true co-lead.

Quaid, who was the best part of the Erwin brothers’ I Can Only Imagine, provides a formidable contrast as the warm and understanding ball-coach to Chance Kelly’s Mike Martz, the Rams’ offensive coordinator. Martz invented the complex aerial offensive that helped the 1999 Rams advance to the Super Bowl, with Warner driving the bus to an MVP season with a whopping 51 total touchdowns. Martz was a famous prick, however. One of my favorite moments as a Bears fan was when Jay Cutler vulgarly called out Martz, his offensive coordinator at the time, which was picked up via mic on a primetime broadcast. I can only imagine what Warner wanted to say to Martz throughout most of that ’99 season.

The Erwins also prove that they’ve become proficient in directing fast-moving football games. Whether it’s the bone-crushing mayhem of the AFL or the controlled chaos of the NFL, their camerawork remains clear and the editing remains tight. It makes up for the plethora of close-ups of actors’ faces coupled with unsubtle orchestration in an attempt to embellish emotion.

If it wasn’t already solidified, American Underdog: The Kurt Warner Story further establishes the Erwins as the almighty ruler of mainstream Christian cinema.

My review of The Jesus Music