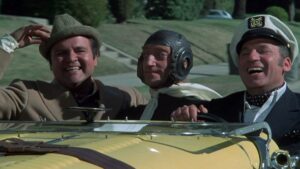 In Silent Movie — one of Mel Brooks’ less-discussed films, by my estimation — Brooks doesn’t simply satirize the conventions of silent films, but an industry becoming more rigid and bound to the almighty dollar. In doing so, the film satirizes itself and its own existence; like a snake eating its own tale. For a project that wants to have its cake and eat it too, it doesn’t get bogged down by its own gluttony.

On the contrary, actually. Silent Movie is a lean, supremely well-made novelty set in Hollywood, where Big Pictures Studios (whose tagline on their front gate reads: “If it’s a big picture, we made it!”) is flirting with bankruptcy whilst fending off a takeover from their rivals, Engulf and Devour. Mel Funn (Brooks), a once-great director whose alcoholism has made him an industry-wide pariah, might have a solution. He tries to convince the head of Big Pictures (Sid Caesar) that a silent movie made in the 1970s could work if it featured a handful of A-list celebrities.

Once given the greenlight (which is more of a shrug and a mouthed “I guess”), Mel and his cohorts (Marty Feldman and Dom DeLuise) begin courting their shortlist of celebs: everyone from Burt Reynolds to Anne Bancroft. Vilma Kaplan (Bernadette Peters), a nightclub singer whose Ba-Ba-Loo only rivals Lucille Ball, is primed to come along. Mel, on the other hand, would be happier if she became his wife.

For every gag that falls just short of being great — either due to its length or general predictability — there are another half-dozen around the corner that do, some of which borderline sublime. A man’s fate rests on a Pong game on a hospital monitor; the Engulf and Devour pledge allegiance to a dollar sign; a pregnant woman climbs in the back of the trio’s vehicle and they wheelie to an urgent care; Marty gets wrapped up in the celluloid of a film as it’s being screened. And Brooks’ facial expressions are indicative that he was raised on a steady diet of Charlie Chaplin, Buster Keaton, and a side of Harold Lloyd.

Brooks, who wrote the film alongside three others, finds a happy medium between his opus Young Frankenstein and his comedically anarchic Producers. While striving for a laugh by any means necessary, he’s also cognizant of form. Silent Movie is rife with boppy musical numbers, whiz-bang sound effects, and pithy interludes that come after characters spend more than a few seconds blabbing. Only one particular gag has aged poorly, involving two female passersby shouting a word that’s become a no-no, not even in reference to a cigarette. If you can find it in your heart to forgive that sin — I, for one, will still sleep nights — you’ll be delighted by a cheery comedy that would be of good contemporary use in the “dare you not to laugh” genre of YouTube videos.