There exists a four-star sequence in Mel Brooks’ High Anxiety. It comes so late, few would forgive you for checking out by that point.

In the final fifteen minutes, Brooks’ Richard Thorndyke and his love interest, Victoria (Madeline Kahn), must pass through airport security with Thorndyke being a wanted man with a gun in his waistband. He suggests they be “loud and annoying,” for no one pays any mind to people out in public who fit that description. The two then do their best impersonation of a boisterous, Jewish couple, essentially carrying out a dramatic, three-act play where stares and grimaces from passersby serve as the applause.

It’s hysterical. I laughed as hard as I have since I began this marathon of Mel earlier this month, in honor of the legend’s 96th birthday. The ironic part is that the sequence had nothing to do with the subject Brooks was taking on for the preceding 80 minutes.

Brooks sets his sights on a tricky target with High Anxiety: the films of Alfred Hitchcock. Casual viewers will instantly recognize callbacks to The Birds and Psycho. Seasoned cinephiles will take note of North by Northwest and Vertigo influences in the plot. People who have explored more Hitchcock than myself (one of infinite personal blindspots) will chuckle at The Lodger: A Story of the London Fog and Rebecca being among those on the veteran comic’s hitlist.

This isn’t the first time Brooks has targeted horror for one of his spoofs. The difference between this and his opus, Young Frankenstein, was Brooks’ marriage of German expressionist aesthetics to a deeply involving plot. The flaws in High Anxiety almost exclusively lie in the script; poor characterization and lame situational humor plague a movie revolving around one of my favorite Brooks’ characters yet — Dr. Richard Harpo Thorndyke.

Thorndyke’s introduction to becoming the Director of the Psychoneurotic Institute for the Very, Very Nervous isn’t a smooth one. A former Harvard professor, his desire to run a tight ship and ask questions about the asylum’s many patients doesn’t sit well with neither the militaristic ways of Nurse Diesel (Cloris Leachman) nor the smarmy Montague (Harvey Korman). Thorndyke’s deep-seated fear of heights is also called into question when it causes him to lose his footing — which makes residing on the top-floor of a hotel a bad arrangement. Eventually, he meets Kahn’s Victoria, the daughter of an inmate who believes he’s a Cocker Spaniel. Her arrival clues him into the fact that Diesel and Montague are hiding something.

Brooks plays Thorndyke a lot like how I imagine the great Woody Allen would play the neurotic, occasionally bumbling professional. He talks fast, constantly seems exasperated, and his loquaciousness with the gorgeous Victoria feels more like Allen than any other Hitchcock protagonist I’ve encountered. Some find this archetype exhausting; I find it deeply endearing, even relatable. It’s a fast-moving world and I exert myself trying to keep pace.

Moreover, Brooks’ portrayal of a relative straight-man — okay, a straight-man with a bit of a lean, depending on the wind — is one he hadn’t yet tackled, at least in a headlining role. It makes High Anxiety watchable despite its misgivings. 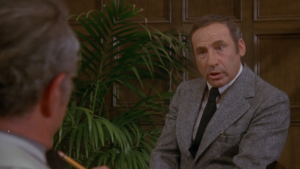 Brooks has always hit the bullseye on the reproductive elements of his films, be it the silent movie-era depicted in Silent Movie, the Western aesthetic in Blazing Saddles, the opulent theatre production in The Producers, or the aforementioned Hammer Horror-aesthetic in Young Frankenstein. High Anxiety is robbed of Hitchcockian flair. Certain interiors, like the asylum itself, are familiar, but the film lacks the appropriate cinematic style in the form of camera angles and subversive pans. Some of the references are so-on-the-nose (the sendup of the Psycho shower scene is dreadful) they prompt eye-rolling. Brooks’ humor has led to eye-rolls in the past but they were often accompanied by a smirk at the very least.

Because Brooks doesn’t nail the style, it seems everything else suffers. Thorndyke’s only lifeline of empathy comes in the form of a doctor played by Dick Van Pattern (I wanted to believe it was Dave Letterman in an early, unhinged performance, but alas). However, he doesn’t merit a lot of laughs either. The best comedy in High Anxiety involves Brooks briefly abandoning the Hitchcock parodies for his own material. Chalk this effort up to a case of “right place, wrong target.”

NOTE: As of this writing, High Anxiety is now streaming on HBO Max.