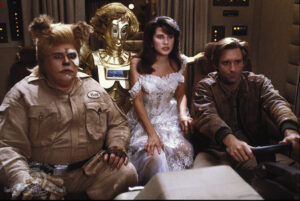 When it comes to the legion of Star Wars parodies, Spaceballs seems to be the one that’s transcended time to become canonized. It seems to be beloved by the original generation of George Lucas fans as much as the generations that followed; the latter being those who fondly remember getting introduced to the series by their parents.

In the end, Mel Brooks is victorious once again, only this time, he’s not parodying style nor an entire industry. Spaceballs is more narrow in its focus, fixated entirely on lampooning the eccentric characters and familiar beats of Lucas’ quintessential franchise. He finds comic life in a galaxy debatably even farther away, but it does come at a cost in terms of cleverness.

We’re dropped on the planet Spaceball, which is seeing its air supply all-but depleted. Keeping the citizens alive is a product called “Perri-Air,” on which they’re becoming dependent. The planet’s desperate leader, President Skroob (Brooks), orders the cantankerous Dark Helmet (Rick Moranis) to kidnap Princess Vespa (Daphne Zuniga) and hold her hostage in exchange for… air. Yes, air, for her planet Druidia is rife with oxygen. Enter Lone Starr (Bill Pullman, doing his best half-hearted Harrison Ford impression) and half-man, half-dog partner Barf (John Candy), the ne’er-do-wells tasked with rescuing the princess before Skroob and company make off with all the air.

Per usual, Brooks is hungry for a laugh and will do anything to get one. This was an admirable feat that worked to near-perfection in Silent Movie and Young Frankenstein. But because Spaceballs opts to be pointed as opposed to broad, it leads to easy punches in the form of Yogurt (also Brooks), a lame sendup of Yoda whose catchphrase is altered to “may the Schwartz be with you.” The pun-heavy dialog makes the material wan a little quicker than it did in some of Brooks’ more refined filmmaking achievements. It’s a wonder why he didn’t attempt to target John Hughes teen movies, or even an industry becoming so incredibly transfixed by pop culture and blockbusters at the time.

Still, what works in spades is the cast’s commitment to these characters. Moranis catches the Brooksian comic wave early, finding his footing as a perpetually grouchy villain low on patience and high on demands. He likely found inspiration by watching Gene Wilder in the director’s earlier efforts, but was smart enough not to attempt to emulate his schtick too faithfully.

Moranis is also the centerpiece in one of the movie’s most egregious gags, which involves Helmet, Skroob, and Colonel Sandurz (George Wyner channeling Grand Moff Tarkin) sifting through a catalog of VHS tapes (Brooks’ entire filmography at the time) before popping in the one for Spaceballs. The trio fast-forward to the point where they are watching themselves watching the now-stagnant movie, unable to proceed because… they’re living it. It’s a nudge at the black-market film bootlegging industry, which was new at the time, and a giddily anarchic one at that.

So much of Spaceballs is giddily anarchic that, in a way, you’re just happy it exists. It merits some undeniably big laughs, and the cast’s evolving chemistry makes it a Star Wars parody worth watching, familiarity be damned.