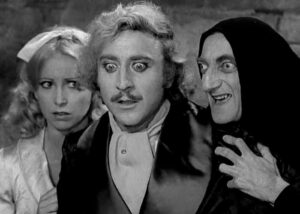 Mel Brooks’ parodies are more than laudable successes. They’re textbook examples on how to make films of the genre that don’t age poorly in a year’s time, but instead become cultural touchstones, easy on which to press play no matter what decade it is.

Of course, that’s easier said than done. Not everyone has the writing, visual, and storytelling prowess of Brooks, let alone the eye for detail. Him and Gene Wilder collaborated to give us Young Frankenstein in 1974 — a simultaneously funny yet disciplined send-up of Mary Shelley’s classic novel that is mature enough not to disrespect its source of inspiration. Brooks and Wilder work magic in creating a stylistically faithful spoof that manages to be a compelling story in its own right.

Dr. Frederick Frankenstein (Gene Wilder) is a respected medical professor. The greatest offense to him is when someone, usually one of his students, brings up his grandfather, Victor, whom he regards as a quack — so much so that he insists his surname be pronounced “Fronkensteen” in effort to curb affiliation. After an animated lecture about voluntary and involuntary movements, Frankenstein is visited by a solicitor who informs him of his grandfather’s will.

He arrives at the Transylvania castle where he meets a charming servant named Igor (Marty Feldman), a buxom lab assistant named Inga (Teri Garr), and Frau Blücher (Cloris Leachman), an intimidating housekeeper. Though he’s long rejected the mere possibility his grandfather brought life back from the dead, he digs into the late Victor’s memoir, “How I Did It,” gets his newfound posse to excavate a graveyard, and before long, has a living monster of his own (Peter Boyle).

So much of Young Frankenstein‘s success rests on Wilder’s shoulders; it’s because he’s excellent that you might not realize it. Wilder’s hysterics could’ve thrown the film off course. They actually elevate it. His energy propels the story forward rather than stopping it dead in its tracks so he can throw a fit. He’s lucid in the moments he’s inconsolable; it’s a deranged and physical performance.

If Wilder is the heart of the movie, Marty Feldman is the soul; far more than a sideshow attraction. Feldman, his bulging eyes, and tight-lipped smile helped earn arguably my biggest laugh of all. It came in the third act upon the arrival of Dr. Frankenstein’s wife, with whom Igor is immediately smitten.

Then there’s Boyle, gifted range thanks to Brooks and Wilder’s smart writing. Here, the monster is given something of a narrative arc, notably when he’s left to his own devices, running around the town. Certain scenes are callbacks to Shelley’s source material, such as his interaction with a little girl. I admittedly haven’t read the novel, but I’m positive there wasn’t a chapter dedicated to his enviably large appendage. That was for Brooks to conjure up on his own — as was the initially controversial “Puttin’ on the Ritz” dance number. Brooks originally didn’t want it in the movie. After it was added, he deemed it the best scene.

It’s during the monster’s wayward period that we also get a mighty fine cameo from Gene Hackman as a blind monk, who offers the brute shelter and a bit of comfort. Instead, in a sequence capped off by effective slapstick, the monster bolts for the woods after having been inadvertently burned and abused. Various sequences featuring law enforcement and the ensuing lynch-mob pepper in light commentary about our love-hate relationship with literal and metaphorical monsters. There’s nothing to dislike about a spoof with a brain in its head.

Young Frankenstein is so stylistically faithful to Hammer Horror films, you almost want to argue it deserves an honorable mention in the canon. Credit is owed to the crew, like cinematographer Gerald Hirschfeld, whose eerie sets are given dimension thanks to the black and white color palette. John Morris’ score is retro without calling attention to itself, marked by some audible scratching and screeching. Tying the ribbon on the package is Brooks’ refined direction. Where his anarchic tendencies overtook themselves on The Producers, his camerawork here is swifter. The overall production is a measurable improvement for the funnyman in the realm of artistic growth and comedic discipline.

NOTE: As of this writing, Young Frankenstein is streaming on Amazon Prime Video.