I’d be a bald-faced liar if I said I wasn’t stoked to see Jay and Silent Bob return in the flesh for the first time since Clerks II in 2006 (Jay and Silent Bob’s Super Groovy Cartoon Movie doesn’t count and has been deservedly forgotten). The two affable stoners were some of my favorite personalities growing up, and are part of a minor cinematic universe I often love to revisit, even to this day.

If you truly think about it for a moment and realize it’s been 26 years since Clerks made a splash at Sundance and was subsequently picked up by Miramax, the elements of counterculture Kevin Smith fawned over in the nineties has now become the dominant culture. Comic-book heroes and shared cinematic universes own multiplexes on the global scale, geek culture is decisively mainstream, marijuana is a bustling business, having been legalized in several states, and even Comic-Con is a nationally covered event. Smith stated in one of his lengthy Q&A shows years back that he “went where the puck wasn’t” at the time, but since then, he’s struggled to stick-handle it in recent years.

That brings us to Jay and Silent Bob Reboot, which Smith has described as “literally the same f****** movie all over again,” in reference to Jay and Silent Bob Strike Back from 2001. It’s a film that may prompt bawdy laughs upon the first viewing, but it doesn’t take an in-depth examination to realize it’s a retread of formula. It’s a project that carries the high-and-mighty attitude that remakes and reboots are shallow, cynical ways to churn a profit while succumbing to those very same conventions. Seeing a massive corporate entity rehash Spider-Man for the umpteenth time is one thing. Seeing a once tried-and-true indie filmmaker — who a one point turned down studio funding and agreed to make a film for $250,000 if he could call on his own desired cast — revert to this kind of lazy filmmaking proves that Smith ran out of things to say long ago. 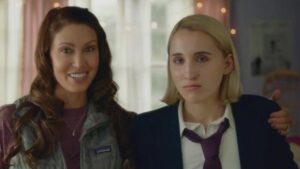 As far as Jay and Silent Bob are concerned, they’re doing all right. The opening minutes of Reboot have the iconic stoner duo — reprised by Jason Mewes and Smith — being arrested for running a conspicuous pot-shop out of a makeshift chicken restaurant in the same plaza as the Quick Stop (RIP RST Video, which has a Redbox before the old storefront). A court appearance has them unknowingly sign away the rights to their likeness to Saban Films (Reboot‘s producer) in order for a gritty reboot of “Bluntman and Chronic,” the stoner superhero characters for which they were the inspiration, to be commissioned. The film, titled Bluntman v. Chronic, which now features Chronic, Jay’s alter ego, as a woman in the age of representation, is also being directed by the hack director of Cop Out. Yes, Kevin Smith.

As if things couldn’t get more meta, Smith’s daughter, Harley Quinn Smith, turns up as Millennium Falcon, the teenage daughter Jay never knew he had. Her mother is Justice (Shannon Elizabeth), the crime-fighting free-spirit from Strikes Back, and upon Jay and Silent Bob meeting her, she cons the two men into driving her and her deaf friend Soapy (Treshelle Edmond), to Chronic-Con, where both men are headed in order to stop the final shot of Bluntman v. Chronic from being filmed. Along the way, they pick up two friends of “Millie,” including a Syrian immigrant and a female podcaster of few (audible) words.

Thus is the essence of Jay and Silent Bob Reboot, a film chock full of stoner punchlines and random, cameo-driven asides all while reeking of familiarity and pot-smoke. There are some smile-inducing moments, however. Matt Damon returns to give us an update on Loki from Dogma, Rosario Dawson is peculiarly plucked into the story as Justice’s new wife, despite her also serving as Becky, Dante’s wife, in the same universe, Joey Lauren Adams shows Alyssa Jones is still thriving, especially in a Twitter-driven climate that demands her side of Chasing Amy be told with a woman’s perspective, and Smith even successfully wrangles Ben Affleck back to reprise Holden McNeil. 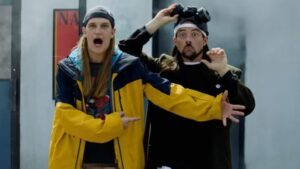 The keyword is “smile-inducing.” The rekindling of old friends for View Askew fans like myself is nostalgic and lightly heartwarming. It reminds us that these characters are instantly recognizable, and their commoner attitudes and dialog is what drew them to us in the first place. Smith has the unimpeachable talent of writing eccentric individuals with mannerisms that make you laugh and mindsets that might even echo your own, if only from the past. What Smith has lost in the meantime is his ability to remind himself that there were more to these characters than just their presence or the fact that through the years, they’ve become in on the joke that is themselves. I think most of us would be content with a new Jay and Silent Bob adventure; even if it didn’t venture too far beyond the comfortable walls of the Quick Stop in Leonardo, New Jersey, and featured Smith’s trademark weed, dick, and fart jokes. To see a previously embarked adventure replayed makes you ask yourself: why am I watching literally the same f****** movie again?

Not since Clerks II have we gotten a thoroughly enjoyable Kevin Smith comedy. Don’t get me started on the throwaway flick that was Cop Out, and please don’t let me restate how utterly loathsome Yoga Hosers proved to be. Even the safeness of Jersey Girl impressed more than the scatterbrained ordeal that was Red State, and the lone glimmer of originality and grotesqueness that was Tusk has become a fleeting memory even for Smith loyals. I’m not in the “show me something funny, Kevin Smith” stage anymore. I’m in the “show me something” stage. Give me a reason not only to watch but expect something different. On that note, expect a virtual mutiny from myself and others if and when Clerks III materializes and it proves to be a retread of Dante’s planned day off.