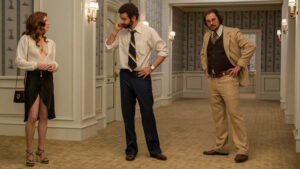 This review was originally written in 2013.

Thanks to its subject matter, ensemble cast, and postmodern approach to mob life, American Hustle could inevitably be considered the best film Martin Scorsese never made. There is heavy truth to this statement. The film, co-written and directed by David O. Russell, who has made a big splash the last couple of years with The Fighter and Silver Linings Playbook, is a devilishly entertaining mob-drama that is more than a costume drama or a showcase for scenery-chewing actors. The film provides for a laundry-list of big names to fit comfortably in the Paisley Velour clothing and immerse themselves in a tried-and-true story of investment and betrayal, all captured elegantly with a wacky tonality to the film’s madness.

The story dramatized the famous crime scandal of “ABSCAM,” that took place in the United States in the late seventies and early eighties and involved many different people from all different social statuses, hustling to keep themselves in front of everyone else. The film centers around Irving Rosenfeld (Christian Bale), a wise, but paranoid con-man who, along with his lover Sydney Prosser (Amy Adams) are employed by an undercover FBI agent Richie DiMaso (Bradley Cooper). Irvin and Sydney are taken into the depths of New Jersey’s political world and mafia inner workings by Richie, as well as getting involved with Carmine Polito (Jeremy Renner), the mayor of Camden, New Jersey who is between a rock (the FBI) and a hard place (the con artists). Meanwhile, the wife of Irving, Rosalyn (Jennifer Lawrence), an increasingly unstable, manipulative woman, keeps getting in the way of her husband’s plans to the point where she is about to pull the curtain on the entire operation and get them all killed.

If American Hustle is the last thing you want to see during this time of year, at least make time for it at one point for the performances. Christian Bale, who just gave another strong but widely unseen performance in Out of the Furnace, delivers an excellent one here, portraying a paranoid con man who would be on the top of his game if he didn’t have his wife, his lover, or, well, anyone else to make him paranoid. Amy Adams gives the performance of her career, so far, along with Bradley Cooper, conveying a deeply-conflicted FBI agent sincerely and effectively.

However, the silver linings here are Jeremy Renner and Jennifer Lawrence, two souls, I believe, won’t get the recognition they deserve in the long run. I was constantly fascinated by Renner’s character of Carmine Polito, who, from the beginning, says he was taught that all people were good and to be good to all people, regardless of the fact. However, even if this is his clear line of ethics, what happens when he is placed in office as mayor, with negotiations coming from the suits and negotiations coming from the con men? Can his moralistic ideology stay in place? Renner shows deeply conflicted and agitated in a way I’m not sure many other actors would’ve.

Lawrence, on the other hand, is Russell’s outlet for comic relief. Sassy, vindictive, and just as big of a hustler as her husband, Lawrence is written by Russell and Eric Warren Singer with a hilarious sense of self-awareness. Lawrence’s Rosalyn knows exactly what she is doing and she doesn’t care if she is being obvious about it or not. Lawrence, herself, plays Rosalyn in a way that’s fully-realized, knowing the ins and outs of her character and seemingly knowing every little thing that makes her tick. Similar but not completely comparable to Sharon Stone’s Ginger in Scorsese’s Casino, she is an unstable, ticking time-bomb that may blow at any second.

Like many great films of the genre, American Hustle has certain scenes that will stay with me for a while, much of this is assisted by its fantastic soundtrack and excellent style. Consider the opening scene, where Irving is “elaborately” fixing his hair with the help of a wig, scalp glue, and an intricate combover with America’s classic jam “A Horse With No Name” playing softly in the background. Or even a scene in a lavish club, decorated with the finest rugs and furniture, with Mayor Polito and Irving passionately singing the tune “Delilah,” while Richie is in a bathroom, stained with strong hues of sapphire, feeling up Sydney. And don’t forget the scene where Rosalyn violently cleans and scrubs her home, in front of her clueless, young child after just making the most questionable move of her life. Scenes like these are simply not easy to forget.

Despite its brashness, and love for colorful, explosively stylistic sets, American Hustle is a character study on how numerous people will go to the ends of the Earth to secure their position in the world, even if it means cheating, back-stabbing, or ruining the ones that helped them get there or contradicting their ideology entirely. Sure, this idea isn’t new for crime dramas, but few have gone the way of Russell and taken it to such a comedic height, yet still making good use of the drama the story has to offer. With excellent performances, an intimate focus on characters, and a cameo by one of the most iconic mobster-actor in history, Russell’s American Hustle soars in the most elegant way possible.