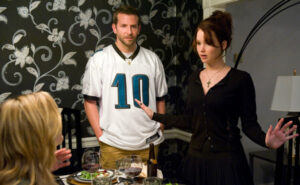 This review was originally written in 2012.

It seems over the years that all romantic comedies have been stamped with the rather dishonest label of “chick flicks” due to their fluffy nature and their schmaltzy screenplays that seem to cater only to the needs of day-dreaming women that are looking for ninety minutes of simple escapism. Not Silver Linings Playbook. This is a serious and simultaneously entertaining romantic comedy that doesn’t substitute antics for characters nor reality for humor.

History teacher Paul Solitano (Bradley Cooper) has just been discharged from a mental hospital and can no return home to his parents’ home after he catches his wife in the act of infidelity eight months ago and completely lost it. He learns that his father (Robert De Niro) is out of work, and making money off high-stakes gambling on the Philadelphia Eagles, and his wife has moved away and gotten a restraining order against him. Paul must now begin the time-consuming task of rebuilding his life and repair surrounding relationships in his life that have no been dismantled because of his bipolar disorder.

Paul winds up meet his friend’s wife’s sister Tiffany Maxwell (Jennifer Lawrence), who has been going through the pain of losing her husband and then committing random sex acts down at her workplace. Meeting each other, we can see they strike immediate chemistry, but their personal albatrosses, Paul with his ongoing devotion to finding his wife, and Tiffany with her inability to keep consistent with her behavior and emotions roadblock them into forming a solid, sustainable relationship together.

After spending enough time together, Tiffany reveals to Paul that she could deliver a letter written by him to Nikki and be the messenger between them if he agrees to be her partner in a dance competition. One of the several subplots, which is handled mainly in the final half of the film, is Paul and Tiffany trying to make a bet on a dance competition and a football game work out in Paul’s father’s favor, as he is facing impending financial trouble with another gambler, and another one involves Paul’s father’s OCD and superstitions to try and make the Eagles win games. With all this madness and little sub-plots thrown into the blender, you wouldn’t believe that they work in unison.

The catch is they do and they do so in a method I can only relate to writer/director Alexander Payne and his barrage of delightful human comedies such as About Schmidt, Sideways, and most recently The Descendants. Payne constructs his characters with layers, making them relatable and easy to like, and writer/director David O. Russell (2010’s Academy Award winning The Fighter) follows the same blueprint for success.

It also came to my attention that this picture further leads Bradley Cooper down the path of an A-list actor. His role in The Hangover is miles away from this one, and his character Paul is far off anything he’s ever done, yet it seems he was born to play the role of a conflicted men who isn’t all there from a mental standpoint. After coming off of the disappointing Hunger Games and the pathetic House at the End of the Street, I feared Jennifer Lawrence was on a path to mediocrity, but it took me about five minutes of her on screen before those two films slipped my mind. She embodies Tiffany in such a divine, confident way I was sure that she will continue to do more great things along this line of work. She is too not falling prey to the typical child-star Disney conventions, where young, mostly female actresses pick G and PG rated pictures that do not test them at all as people or character actors. Lawrence seems to be too good for that schlock. And it must be said as well that Robert De Niro, after a string of dismissible performances, has finally found his second calling in the film industry aside from breakneck mobster features and that is the sly, humorous father figure that is desperately trying to keep his troubled son close.

Both Pat and Tiffany wind up having some sort of complex, emotional outburst that affects them massively and the people around them also. Both sequences aren’t played for laughs, but for complete seriousness which works in favor of the idea that Russell is not playing for cheap laughs but for respect for those with mental illnesses. Even in his sequences, Chris Tucker, noted comedian and actor that can take a light setup and drum it into something completely silly, is portrayed in a sincere light and is not offered up as the butt of the joke or a lame-brained, obnoxious best friend to reiterate everything Pat says (unlike Kevin Hart’s role in Think Like a Man). Silver Linings Playbook is a simple, endearing exercise that is along the same line as Safety Not Guaranteed, in the idea that it’s quirky and self-aware, but it has more to offer than stale fodder that passes for uniqueness.