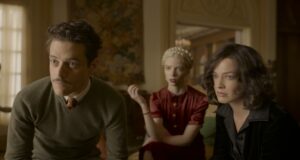 Amsterdam is kind of like Kids Say the Darndest Things except it’s more like “A-List Actors Never Shut the Hell Up.” On top of the movie being stuffed to the gills with characters and plot machinations, the performers are basically talking over each other trying to outline the innerworkings of a complicated narrative. It has its moments — like Michael Shannon waxing poetic about birding — but they’re few and far between.

The only thing more confounding than trying to explain what David O. Russell’s latest ensemble piece is about is figuring out how a movie featuring Christian Bale, Margot Robbie, John David Washington, Zoe Saldaña, Anya Taylor-Joy, Rami Malek, Chris Rock, Robert De Niro, Taylor Swift, Michael Shannon, and Mike Myers could be so wrongheaded. Russell’s feature feels overwritten and underdeveloped; a cornucopia of talent ushered inside a whodunit that spontaneously tries to serve as political commentary — and invites faint meta jokes into retro comedy that feels contrived, even desperate.

Amsterdam is similar to Adam McKay’s Don’t Look Up. Where that film was successful — albeit imperfect and mildly frustrating — Russell appears to want to adopt the tone of being informative while also lecturing in that holier-than-thou Hollywood fashion. His usual strengths — on display over the last decade, in Silver Linings Playbook and American Hustle — was hatching an ostensibly straight-forward narrative whilst juggling multiple different tones and idiosyncrasies so deftly that it was like watching a career juggler work his magic. This time, however, the items start crashing down to Earth quickly and more dramatically than they ever have.

The film opens in 1933 New York, setting up the template for an amusing, romp-y buddy movie. The buddies are Burt Berendsen (Bale) and Harold Woodsman (Washington). Burt is a scraggly Jewish doctor, who spends his days holed up in his office concocting new medicines for wounded Great War vets like himself. Harold is a combat partner/friend of his, who now works as a lawyer. It’s Harold who ropes Burt into the curious death of a respected general (Ed Begley Jr.), who was in good health and set to speak at a veterans reunion party. The general’s daughter (Swift) believes there must be foul play, which they discover is true in horrific fashion…

CUT! At that exact moment, we flashback to 1918 Europe to see the origins of Burt and Harold’s friendship in a French hospital. It’s also there where they befriended Valerie Voze (Robbie), a pampered but troubled nurse. When we mercifully return to the present, Valerie becomes involved in this caper, just as outside forces — in the form of a Yankee/British spy duo (Shannon and Myers) and Valerie’s brother (Malek) and sister (Taylor-Joy) — start to encroach on their findings.

By the time we return to the present (after probably a 25-minute diversion), our heads are clouded by characters, conflicting motivations, and ultimately, a lessened sense of intrigue. Totally different genre, but consider Zach Cregger’s Barbarian from this year, a horror film with three distinct chapters. Cregger was gumptious in choosing to start new chapters at the climactic point of the previous one. You could say it was a miracle he retained your interest. But ponder his craft for a moment and you realize how he made the diversions worthy of your attention based on the intrigue he set up. For all the jumping he did, he made sure to cohesively connect the seemingly disjointed pieces together to tell a complete story.

Russell introduces so many individuals in such a swift amount of time, it’s as if you’d need a 15-episode miniseries for this story to feel truly complete. But for all the time most of these characters get, it’s only Burt, Harold, and Valerie who emerge feeling developed. Most of the other esteemed, credentialed actors are given lengthy run-on sentences to expound, and are married to a madcap assortment of hijinks that misconstrue energy for interest. The comedy rarely lands, as Russell tries but fails to install 30s screwball humor into a politically minded whodunit. It’s grating more than it is amusing.

Perhaps Russell’s style — following controversy and an extended absence, as Joy, his last notable feature, is somehow seven-years-old — has grown stale. Perhaps this is just his first misfire after several strong works. However you want to slice it, Amsterdam is long and tedious; its sporadic instances of inspiration not merely enough to justify its lengthy stretches of mediocrity.