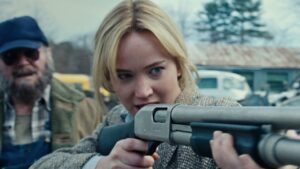 This review was originally written in 2015.

It wasn’t until about a week ago that I realized that I’d be seeing David O. Russell’s Joy on Christmas Day and was simultaneously struggling to make heads or tails of the film’s plot. The film’s trailer seemed like a very low-key picture about a single mother’s redemption via self-realization and determination. It wasn’t until the first hour of the film did I realize this film was a biopic on Joy Mangano, the self-made millionaire who found overnight success on QVC selling the Magic Mop and other household appliances that made for convenience or ease of use.

Perhaps it’s because of the general perception of biopics in American cinema being cliched or far too common or the desire to make Mangano a more general character rather than a pop culture figure, but for whatever reason, the marketing team behind David O. Russell’s latest film owe Mangano some kind of an apology. Not only was the promotion for this film so vague that it obscured her story to audiences, who may have even wanted to see the film, it also undermined what is otherwise a strong story about the cyclical patterns of being an entrepreneur in modern-day American and what it means to aspire to be more than a woman being forced into domesticity by restrictive parents.

As stated, the film follows Joy Mangano, played by Jennifer Lawrence, who is living every woman’s worst nightmare – a single mother feeling anchored by her two young children, living in a house with her separated mother and father, in addition to her ex-husband and grandmother. Her mother, Terry (Virginia Madsen), spends her days locked in her room watching a vapid soap opera and obsessing over the characters in said show, her father, Rudy (Robert De Niro), moves in after his latest girlfriend kicks him out, and spends most of his days lonely in the basement, scouring the web for love, her ex-husband, Tony (Édgar Ramírez), whom she fell in love with upon recognizing his amazing singing skills and starving artist ambition until she realized little rested beneath the surface, and her grandmother, Mimi (Diane Ladd), suffers from arthritis and serves as her kids’ babysitter. Throughout her entire life, all Joy has tried to do is make her modest life work to the best possible degree, but she continues to get bogged down by poor circumstance no matter which way she chooses to go.

Her mother always taught her that she’d go to school and meet a fine young boy, have a few kids, and spend the remaining days of her life attending to a mid-sized home in addition to a few youngsters while her husband served as the breadwinner. Her father placed larger expectations upon her, despite quietly thinking that she couldn’t bear such stress of maintaining a job and making a success out of herself. Most of this kind of external, outspoken negative and restrictive energy would have most women screaming about their own independence and their rightful freewill, but Joy just bottled it all up, saving it for a rainy day.

The aforementioned storm comes when Joy decides to capitalize off of an idea she had in her mind for a one-of-a-kind mop: it’s a mop with a head that would be able to absorb the contents of a large room, be rung out without touching the mop-head itself, and have the same mop-head be detachable for washer/dryer use. The idea just seems crazy and logical enough to work, which leads Joy to creating prototypes for such an invention and attempting to sell them at K-Mart to no avail. With that, Joy is lucky enough to find Neil Walker (Bradley Cooper), an executive at the QVC network who helps give Joy the necessary publicity and exposure to make her invention a hit and propel her to overnight stardom.

Joy isn’t your average story of rags-to-riches stardom, largely because the rags don’t turn into longterm, or even momentary, riches. Every time Joy seems to get ahead, be it by achieving hundreds of thousands of sales of her mops on QVC or earning enough money to get out of debt, a new and uglier problem raises its head, be it the theft of her patent or her profits in some way. Joy makes multiple deals with the devil in terms of leaving herself vulnerable and helpless if things don’t work out exactly the way she needs them to, including taking out a second mortgage against her home and borrowing copious amounts of money from her father’s girlfriend all in the name of giving her daughters a better life.

Through it all, Joy is doubted and has the sand kicked in her face multiple times. It’s enough to make the viewer want to speak up for the titular character when she is unable to do it, taking in all the comments of her detractors, most of them her family, like they’re the oxygen she needs to breathe. She reminds of a character Katharine Hepburn would’ve played with enormous conviction, as she would’ve likely highlighted all of Joy’s insecurities and inability to defend herself in situations that tested her self-esteem. Thankfully, Joy is played by Jennifer Lawrence, an actress who is only twenty-five, yet bears the acting chops, look, and natural talent to pull off middle-aged, or at least a significantly older character.

Meanwhile, most of the supporting casts works to pull off roles that tread the lines of comedy and drama, as they often do in a film helmed by Russell, particularly Cooper and De Niro. The biggest setback with Joy, other than the lack of confidence in its story judging by the film’s approach and the fact that it undercuts Mangano’s namesake and significance for so long, like it’s ashamed it exists to tell her story, is the disjointed direction. For the first hour, Russell conducts this film like a soap opera, undoubtedly juxtaposing the film with the ridiculous soap opera Joy’s mother watches on a regular basis, by introducing numerous characters and numerous dramatic situations. Halfway through the film, Russell abandons this style to focus on Joy’s rise to fame and the multiple setbacks she faces in a cynical world that ostensibly doesn’t want her to succeed. Such dichotomous approaches would’ve worked well if they had served as the thesis for the two-hour film, but with this approach, the film comes off as woefully disconnected and miscommunicated.

With all that in mind, Joy is well worth seeing because of the way it handles its titular character in a way that shows her as a victim to reality and a lack of true moral support, despite her own muted, personal desire to succeed in a hungry world. The idea of an underdog trying to succeed and take their bite out of a world where everyone is hungry for their own piece isn’t new; Russell’s decision to focus on a real-life figure clawing her way to the top whilst getting spat in the face no matter what she does and tying it together in a way that emphasizes female empowerment in a way that doesn’t feel like a motivational poster is, in fact, new. The only thing you, the viewer, is asked to do is forgive a few narrative setbacks and mixed delivery. As always, this cluttered Christmas Day weekend, the choice is yours.