Within the first half hour of Damien Chazelle’s Babylon, here are some elements to which you’ll bear witness:

With Babylon, Chazelle furthers his fascination with characters in pursuit of perfection. This is a film about the ambitious yet ill-fated performers that make the Hollywood machine run — until they’re steamrolled by it. The 37-year-old filmmaker has made waves with such features as Whiplash and First Man, which looked at characters so obsessed with their craft, they closed off every other aspect of their life. Was it worth it? That was for you to judge. When it comes to Babylon, Chazelle could’ve used some more concretion to answer that question — especially given the fact that he works in the very industry he’s simultaneously condemning and praising over the course of three hours. 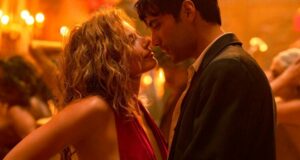 Taking place in Hollywood during the Roaring ’20s, his latest introduces us to Manny Torres (Diego Calva), a Mexican-American looking to break into the film business during the twilight of the silent film era. His first task is trying to get an elephant to an off-the-rails, coke/sex-charged Hollywood party. Once the task is complete, he meets Nellie LaRoy (Margot Robbie), who arrives with an ego the size of Marilyn Monroe’s despite still waiting for her big acting break. Nellie is the kind of beauty that Hollywood loves to chew up and spit out, and her alcohol and drug dependency all-but-writes her fate better than any screenplay could. There’s also Jack Conrad (Brad Pitt), a silent film star nearing his third divorce and struggling to adapt his acting abilities to the advent of sound.

At the conclusion of this seemingly never-ending party, we also get glimpses of the lives of others: Sidney (Jovan Adepo), a jazz trumpet player; Lady Fay Zhu (Li Jun Li), a cabaret singer; and Elinor St. John (Jean Smart), a gossip writer, who attends parties such as these for material. Over the course of the film, we’ll watch Manny become a studio executive, Nellie become Hollywood’s next big thing, and Jack wrestle with his demons, all while other recognizable actors such as Spike Jonze and Jeff Garlin lurk on the perimeter.

Inside this movie of behemoth proportions exists two or three terrific sequences. One of which involves Nellie and the crew doing take-after-take of a scene that isn’t more than 30 seconds long, and she is the sole performer. Persistent sound issues continue to cause problems, however, and the hot-lights are making everyone sweaty and frustrated. Emotions amongst the cast and crew flare up more than once. It gives life to the suffering on set that we as audience members don’t see. Anyone who sees any finished product could be convinced that working in movies is a fun job. That is, until you’re sitting around in the desert waiting for some lackey to retrieve a camera while daylight is burning.

This cinematic tapestry, with elite cinematography from Linus Sandrgren, and an operatic score by Justin Hurwitz (“Voodoo Mama” might be the best original number of the year) are underserved by Chazelle’s script, which can’t figure out if it wants to mourn those crushed by the film industry or celebrate the art we got anyway. The lack of concretion is frustrating. It’s the performers who manage to turn archetypes into characters.

Margot Robbie fits the role of Nellie like a glove. Robbie is strong enough as an actress to show why Nellie LaRoy would’ve gotten the star treatment relatively quickly, for more reasons than just being a pretty face. Diego Calva stakes his claim for stardom by making Manny a breathlessly determined workaholic, willing to do everything from race across town to rent a camera to attend the seediest of underground parties with a gaunt Tobey Maguire as his liaison; anything to make a name for himself. But it’s Brad Pitt who owns the screen as the elder statesman. Pitt himself has been a movie star for the better part of three decades. He’s witnessed those heralded as “the next big thing” nosedive into irrelevance first-hand. That’s why the character of Jack Conrad is as sad as he is. His suave demeanor and charismatic bravado are nothing but fronts that show he is a lonely, limited actor whose lack of range is being exposed. Jack’s monologue about the purpose of cinema — to give hope and comfort to the lonely, to inspire the unmotivated — is beautiful stuff. Even if it ends with him faceplanting into his pool from a two-story drop.

This trifecta shines while other supporting performers fade into the background. There’s a great subplot involving Li Jun Li’s Lady Fay, who doubles as a lounge singer and the author of title-cards for silent films. Her crowning scene is rescuing Nellie LaRoy from meeting death by way of sheer stupidity. Jovan Adepo is afforded one upsetting scene where he’s forced to apply burnt cork (the traditional blackface makeup) to his face. The goal is to make himself appear as black as his backing band, as the hot-lights are whitewashing his complexion. There’s another angle to be explored here. Chazelle flirts with it, but skirts interest beyond that sad moment. It wasn’t the hedonistic debauchery of Babylon that wore me down. I sat through Boogie Nights and The Wolf of Wall Street and experienced a range of emotions. I’d be happy to do it again. The difference present with those films was that they knew what they wanted to say and how they wanted to say it. When Chazelle shows the pitiful downfall of Nellie, and later, a far-removed Manny returning to the scene of many, many unspeakable crimes, the takeaway appears to be as succinct as, well, we got Singin’ in the Rain, so the pain, suffering, and death was worth it in the long-run. That argument can be made, but some confrontation is in order. Instead, Chazelle wraps up things with a smile-inducing but ultimately flat montage of world cinema’s greatest achievements. It gives the impression that Chazelle was happy to attend these aforementioned parties unscathed, unlike some of his cohorts who weren’t nearly as lucky.