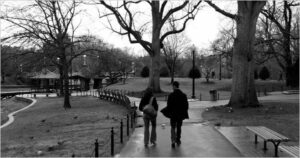 Who would’ve thought director Damien Chazelle, following his low-key, festival-success with Guy and Madeline on a Park Bench, would go on to be something of a hot commodity in the film world just five years later with the release of his sophomore effort Whiplash, meriting several Oscar nominations and wins and a whirlwind of positive buzz? To say Guy and Madeline on a Park Bench is a different film from Whiplash is an understatement. While I obviously did not go into this film expecting to see a film similar in style or quality to Whiplash, judging simply by the plot and the poster, I think it’s worth noting that I’m not particularly sure both of these films exist in the same universe together. I highly doubt there’s anything resembling a Terence Fletcher in the whimsical world of Guy and Madeline.

The film takes place in Boston, centering on the titular characters (Jason Palmer and Desiree Garcia, respectively), who’ve been dating for about three months. Guy is a jazz trumpeter, obtaining whatever work he can get in jazz clubs or underground subways, just to make end’s meet, and Madeline is an introverted soul who can’t seem to find any kind of work. The immediate shock of meeting one another and falling in love has faded for both of them, to say the least, as Guy is now pursuing the likes of Elena (Sandha Khin), a more adventurous soul with a more outgoing personality. This leaves Madeline out tremendously, to which she responds by trying to get her own life on track with a new boyfriend whilst Guy continues to play his nightclubs and make a living as a jazz musician.

Guy and Madeline on a Park Bench is like a cross between contemporary mumblecore filmmaking and the classic, Hollywood musicals of the 1950’s, which featured enough whimsy and warmth for an entire franchise. Chazelle employs the directorial style of shooting close to the subjects, using extreme close ups or traditional close ups in order to presumably conjure intimacy within its subjects. Combine this with the grainy black and white cinematography and method of shooting and you have a film that’s more enjoyable as an exercise in style than anything else. The aforementioned qualities that seem to be extracted from 1950’s Hollywood musicals, however, poses a nice change in pace for the mumblecore style, rather than the traditional band of twentysomethings talking and rambling about their existence and their lives in closed, tight-knit settings like lofts and apartments.

It seems whenever the genre of mumblecore – and by “mumblecore,” I mean the cinematic subgenre/style of shooting with lower budgets, low-quality cameras, amateur actors, and an emphasis on naturalistic writing and acting, traditionally by way of improvisation – decides to increase its playing field by pursuing genres such as musicals and horror films that they’re mostly enjoyable as stylistic exercises and little else. Mumblecore is such a difficult subject to explain, and, more often, recommend, because its ability to be likable starts and ends with the focus it puts on its characters and the qualities of their personalities. If you have a film of the genre with lackluster characters that don’t do much else other than lackadaisically converse and don’t exchange anything of noteworthy insight or ideas, than you have a film that’s fairly stagnant in its likability.

That’s more or less what happens with Guy and Madeline on a Park Bench; the actors here are uniformly capable and Chazelle’s close ups along with self-executed cinematography make for a film that takes on a new life all its own in terms of look, feel, and mood. However, in the process, there’s little to no character or philosophical development for the film’s titular characters, leaving them lost in the shuffle while the environment and the film’s own atmosphere engulf them entirely. What we have here, again, is another mumblecore film that is much more intriguing to speak about and discuss rather than actually view.

NOTE: As of this writing, Guy and Madeline on a Park Bench is streaming on MUBI, and also on Amazon Prime Video with a MUBI subscription.