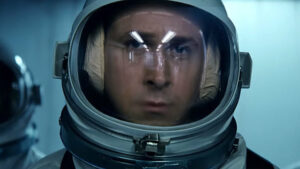 Any aspiring filmmaker would kill to have a career akin to Damien Chazelle’s. At 33 years old, he has already made more great films than many directors will make in their lifetime. His works have both been nominated for and won Academy Awards, and it’s getting to the point where an acclaimed film from the Rhode Island-born director is something we should both expect and anticipate at the tail-end of every year. After being shell-shocked by Whiplash, I was convinced Chazelle was a talent to watch. Once I was swept away by La La Land, that thought was confirmed, and please, whatever you do, don’t forget about Guy and Madeline on a Park Bench, his unassuming first feature that is also very much worth a look.

Now we have First Man, one small step for some but one giant leap for Chazelle. As much of a crowdpleaser La La Land was, First Man also sees Chazelle striving to reach a broader, older audience with a story indelibly etched not only in American history but history as a broad, border-less field of study. The film looks at Neil Armstrong, as it focuses on the events leading up to the July 1969 moon landing. Armstrong gets approved by NASA to be a part of what is essentially one giant gamble; one that involved thousands of hours worth of labor and scientific calculations. Chazelle contrasts the hubris of the United States government, whose ultimate goal was to defeat the Soviets in the “space race” with the astronauts, physicists, and engineers who wanted to propel science to unforeseen levels and get everyone back alive.

Armstrong, played by Ryan Gosling in another tight-lipped, glazed eye performance, is seen as stoic and mannered, even when confronting the real possibility he’ll die trying to get to the moon. His wife, Janet, played by Claire Foy, who is having a career year, mind you, is the one forced to grapple with the emotional burden of his choice. She’s the one who has to look after the children and explain how their father could very well never come back home. One day, she finally can’t do it anymore and insists he explain to them the severity of this mission, in hopes to demystify their fears as best he can. In a defining scene, Armstrong addresses his children’s questions about the Apollo 11 mission as if he’s Bill Belichick in a post-game press conference. 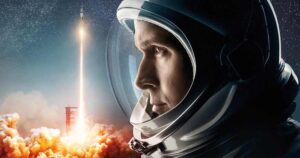 First Man finds common-ground with Christopher Nolan’s Dunkirk. Written by Spotlight screenwriter Josh Singer, the film feels within arm’s reach of its characters, far more consumed by their accomplishments and the surrounding history than it does with them as individuals. If you aboard First Man with hopes you’ll gain an insight to Armstrong as a person, you’ll likely be sorely disappointed. Ryan Gosling’s Armstrong feels like another Ryan Gosling character: the one you saw in Drive, Only God Forgives, The Place Beyond the Pines, Blue Valentine, Blade Runner 2049, and probably others I still have yet to see. Gosling speaks in simple sentences through pursed-lips, and feels less like Armstrong and more like his archetypal, minimalist self. As if to recreate the dynamic between Neil and Janet on a meta-level, it’s Foy, whose performance in this year’s under-seen Unsane still leaves me shaken, who does the heavy-lifting here, compensating for what Gosling unfortunately doesn’t bring to the table in the realm of acting.

But my Dunkirk comparison goes even further. This is a technically impressive film about a significant moment in history, and the event is treated with the gravitas and impact that it deserves. In particular, the moon landing sequence is powerful, as Chazelle contrasts the rocket’s rattling with an eerie stillness upon the moment we’re made to realize we’ve boldly gone where no man has gone before. In conjunction with Chazelle’s directorial prowess are the skills of composer Justin Hurwitz (who worked on all of Chazelle’s previous films), who knows when to dial down the strings and focus on the ambiance, and cinematographer Linus Sandgren (Battle of the Sexes), whose sense of spacious visuals is as clear and crisp, assuring we’re never lost in intergalactic confusion. You can easily get lost in it all, and part of that is because there’s not much gripping you when it comes to the interpersonal drama.

This is a film that feels very methodical. Chazelle clearly loves handsome, moody productions with strong colors and passionate performances, but First Man doesn’t have the energy of his previous features. It feels like it’s in-awe of the moment as opposed to attempting to capture that same awe, and what we have is a workable, sporadically engaging work but one too easy to shrug at when it’s all said and done. It’s not like Gosling gives us much humanity and heart to analyze in Armstrong, and Chazelle doesn’t seem too invested in his character’s plights despite making us hyper-aware of all they had to sacrifice and grapple with while trying to be a part of history.

First Man isn’t a bad movie, but like Dunkirk, it’s a film where the experience will ultimately sway your enjoyment. I made the statement in both my written review of Nolan’s film and on my old radio show that Dunkirk will have only a modest impact on viewers who go on to watch it on cable networks and laptops as opposed to those lucky few who saw it on screens the width of assembly lines with sound-systems that make raves seem easy to tune out. First Man‘s impact is only as grand as the experience in which you have while seeing it, and I predict those seeing it during sleepy matinees or down the road on cable or DVD will have an appreciable but ultimately forgettable experience when all is said and done.

NOTE: As of this writing, First Man is streaming with a premium Hulu subscription.