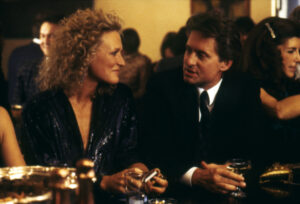 The film stars Michael Douglas as Dan Gallagher, a successful lawyer in a happy marriage for nine years. He adores his wife, Beth (Anne Archer), and his six-year-old daughter, Ellen (Ellen Hamilton Latzen), and has no strong misgivings about either of them on the night he meets an attractive, mysterious woman named Alex (Glenn Close) at a business party. The two converse, and one weekend when Dan’s wife and daughter are out of town, he invites her out to dinner.

So, they enjoy a fine meal and have passionate sex everywhere from the freight elevator at Alex’s apartment to her kitchen sink. They spend the remainder of the weekend at the park and taking walks. Dan makes it clear that he has no intentions of divorce and that he sees this affair as “two adults who saw an opportunity and took advantage of it.” Alex sees it differently. Once Beth and Ellen return, and Dan tries to assimilate back into “normal,” married life, she begins calling persistently. She turns obsessive: phoning Dan’s house in the middle of the night, showing up at his office unannounced, and at one point, attempting suicide.

Fatal Attraction‘s signature quality — the one that has made it so endeared, I feel — is its commitment to plot. At two hours long, there’s not a shred of fat on it. James Dearden’s dialog is precise and mostly realistic, written to serve a story that becomes increasingly more believable as a simple affair segues dangerously into a cat-and-mouse game. No scene feels unnecessary. The opening, for instance, details Dan’s busy household. He can’t find his blue suit, which is hanging right where Beth said it was. Beth is rushing to get ready for the aforementioned business party; her friend phones to confirm they’re not going to wear the same color. Ellen, on the other hand, messes with mommy’s makeup and repeats a dirty four-letter word she heard Beth utter under her breath.

We know all we need to know about Dan’s homelife in those couple of minutes. It’s a busy existence, but not an unviable one. Coupled with his work, it’s just hectic enough to see why he’d want to slow life down and go on a lunch-date with another woman. He proceeds to let down his guard long enough to make an entirely regrettable decision.

Director Adrian Lyne grants Dearden’s dialog a respectable platform with an equally economical style. His frames show us all we need, with very little flair. Cozy, illuminated interiors show us the characters’ contrasting private spaces. Dan’s home is indicative of a married household with a toddler in that it’s messy yet homey. Alex’s home is more barren, with exposed brick and bare minimum essentials suggesting a very limited personal life. Together, Lyne and Dearden are harmonious in giving Fatal Attraction what it needs to be effective.

Fatal Attraction is probably one of a handful of classics that could justify a contemporary remake with a more humanized depiction of Alex and a more developed Beth. Despite the confines, Close is able to shine in a role that’s both sexy and terrifying. Archer is by default second banana, yet she has her moments, specifically when Alex drops by Dan’s house, pretending to be a stranger interested in buying their home. For a thriller, it too must be said that the characters consistently make logical decisions as opposed to foolish ones in order to advance the plot in outlandish ways.

This level of attentiveness, mainly from Dearden’s script, is what makes Fatal Attraction entertaining no matter how groan-inducing that finale might be.