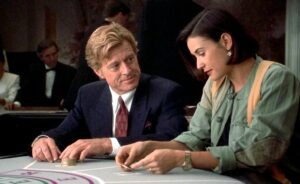 One can argue that Amy Holden Jones’ (working off of Jack Engelhard’s novel) script for Indecent Proposal is wrongheaded thanks to the very nature of its premise, which has a female character serving as a commodity, or a pawn, for two males. I’m not willing to go there, for I don’t believe the movie itself is making any sweeping generalizations about the nature of women. Nor do I think its premise is one that’s particularly outlandish whatsoever. Certain people’s sexual lifestyles are predicated on similar arrangements, and many aren’t even done for money.

What I will argue, however, is Jones’ mistake is sidestepping any sort of insight into the marital corruption of a couple in favor of your typical, saccharine, 90s Hollywood ending. Tis a real pity given Indecent Proposal was directed by Adrian Lyne, who merely seven years ago gave us Fatal Attraction. That movie had bark. This barely has a growl.

The story centers on David (Woody Harrelson) and Diana Murphy (Demi Moore), high school sweethearts now happily married in California. He’s an architect, she’s a real estate agent. It’s all too perfect, so cue a recession. Their finances are depleted and they have no idea how they’re going to pay their mortgage. Their last-ditch effort is a trip to Las Vegas to gamble. At one point, they’re up over $20,000 before giving it all back to the house.

That’s when a mysterious billionaire named John Gage (Robert Redford) enters the picture. He takes an immediate liking to Diana when he sees her ogling a dress at a shop. He sees his chance when he asks David for permission to have her sit with him during a high-stakes craps game. Diana provides him with some luck after he orders $1 million in chips. After the adrenaline rush subsides, Gage has a proposal for the couple that will alleviate all their present and potentially future financial concerns. He offers them $1 million if he can spend a night with Diana. And that includes sex.

Where Fatal Attraction utilized economic filmmaking tactics and a dichotomous visual arrangement for two separate interiors, Indecent Proposal is just visually bland. Its soft palette almost looks drained of color. The sex scenes, on top of being few and far between, feel badly neutered. This is a movie in search of a personality.

But the coffin-sealing nail is Jones’ inability to take any sort of stance on monogamous unions, or anything significant enough to warrant the experience being memorable. The hackneyed finale feels written for a completely different film. Maybe studio executives feared the material would be dividing, so they implored the filmmakers try to satisfy both those looking for a sensuous thriller and those wanting the purity of marriage to be reaffirmed by the end. If that was the case, the decision effectively pleased no one — a classic compromise.