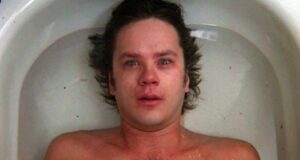 Rarely does a film after all these years leave me so despondent and glum. Jacob’s Ladder did.

A film so melancholic and, at times utterly, hopeless, Adrian Lyne’s cult favorite delves into the unstable mind of Jacob Singer, played by Tim Robbins. He’s an American soldier, who is deployed in Vietnam and experiences some traumatizing moments of combat and peril no human being should ever endure. The film drops in on Singer and his fellow troops as they engage in a vulgar discourse that can only be described as “war talk” before many of them begin showing signs of seizures and total mental breakdowns. Back in New York, Singer awakens, revealing the opening sequence to be a dream of his past life. He has already reentered society a broken man.

Although the nature of Singer’s time in Vietnam is revealed at the end, a fog of unreliable events and information looms over Jacob’s Ladder from start to finish. A great deal of time passes as we watch Singer, who earns a doctoral degree following his deployment, try to operate in normal society. Tidbits of information are revealed over the course of the film, slowly and inefficiently, kind of like if we were to just shadow him in real-life but never engage him in conversation. His first marriage disintegrated, effectively capsizing when his young son was killed, and he currently holds down a job at the U.S. Postal Service while living with a lover named Jezebel (Elizabeth Peña). His life is essentially a highlight reel of misery: crippling visions haunt him on a regular basis, ones that show demons without faces and the hell of war all over again, his disoriented state almost causes him to be hit by cars and run over by a subway, and people who are close to him, such as his doctor, are killed in inexplicably violent ways.

Singer methodically begins to regain his footing when he reaches out to his surviving Vietnam friends, entertaining the idea that they were victims of a dangerous Army experiment. They all recall similar sensations of their dizziness, vomiting, and spastic episodes before not being able to adequately piece together the following days, or even weeks. Progress comes when the veterans agree to speak to a lawyer about their experiences, but eventually, all but Singer back out of the potential lawsuit, even the lawyer, leaving him just as helpless as he was when we dropped in on him and his life.

Jacob’s Ladder is a mesmerizing nightmare of a movie, with certain scenes I’m in no rush to watch again any time soon. This is not an indictment on their quality, but an affirmation of their effectiveness. The famous bathtub scene, for one, has the ability to send chills down your spine, and the inability to decipher what is really occurring and what is part of Singer’s fractured mental state makes it all the more vivid. The aforementioned opening scene, which turns from casual to calamitous in lightning speed, shows how fast things change for folks on the frontlines, and how those who are implored to be prepared for anything can find their way out of a harrowing situation but nonetheless be incapable of saving themselves.

Tim Robbins is strong in a performance for which there is no adequate playbook. Writer Bruce Joel Rubin (Ghost) thrusts Singer around like an action figure given to a young child, from place-to-place, scene-to-scene to the point where it’s as if Robbins is at the mercy of a schizo experiment in narrative discombobulation. Coming off a brazenly cocky and fiercely watchable performance in Bull Durham, Robbins’ prowess with a non-linear story and an unreliable character is sometimes so effective you want to take your eyes off the screen. I had to pause this movie and take it in silence many times.

Lyne has a distinct directorial style, so distinct I almost fail at finding words to pinpoint it. His catalog of films, 9½ Weeks, Flashdance, and Unfaithful, just to name a few, feature somber, moody production that’s characterized by heavy darkness and lofty drama that bleeds into the look of the film. His visuals have all the makings of a living room characterized by worn faces, illuminated only by a desk lamp turned on the lowest notch. Jacob’s Ladder, however, lacks this usual gloominess in favor of an occasionally brighter but still ugly emphasis on the underbelly of New York. It’s as if the dirt, grime, and unsavory aspects of the poster child of a big, industrious American city are put under a magnifying glass while Robbins’ Singer is the unstable guinea pig forced to navigate such a dangerous locale. I kind of wanted to be brought back into the dark rooms.

The ending of Jacob’s Ladder is quite beautiful. It provides a sturdy wraparound statement that makes things clear yet permits retrospection on everything we saw Jacob experience over the course of the film — and it’s still ambiguous to boot. This is a film that might be unbearably depressing for some; the kind of movie that benefits from a few pauses and some self-imposed intermissions. I sort of loved it, but am not sure I’ll ever watch it again.