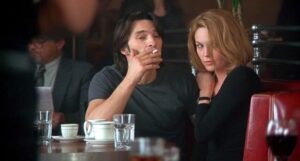 Connie (Diane Lane) and her husband Edward (Richard Gere) live a content life in the middle-class suburbs of New York; not happy, but content. With their nine-year-old son, Charlie (Erik Per Sullivan), days are at least sprinkled with a little bit of excitement. In the opening scenes of Adrian Lyne’s Unfaithful, we’re supplied with enough context to believe that both Connie and Edward have a marriage that may not bear the gushy romance it quite possibly once did, but at least has the loyalty and bond of one that’s firmly in-tact. One windy day, Connie ventures down to New York City where she is nearly blown away. Escaping a nasty fall with only a knee-scrape, she catches the attention of a rare book dealer named Paul (Olivier Martinez), a handsome soul who invites her upstairs for a cup of tea. Once in his apartment, Connie is surrounded by literature and the possibility of a brewing affair.

Paul seduces Connie in a crafty way. The kind of manner where things just naturally occur, and impulse precludes any rational, in-the-moment thought that this might not be a good idea. He reads her some Spanish poetry, gifts her a book, and tells her he’d love to see her again. Against all her better judgments, she obliges, and it eventually turns into romance. The two become like horny schoolkids, having sex in public bathrooms while her friends are just a few paces outside, and Connie crafts several excuses to go into the city and see her new lover, as if Paul’s initial line of quoted poetry has been taken a bit too literally by her: “be happy for this moment,” he reads upon their initial meeting, “for this moment is your life.”

Over time, Edward begins to suspect something is up. He’s suspicious enough to hire a private investigator, who eventually delivers him the soul-crushing news. It’s this fork in the road instance where Unfaithful could become a ridiculous and overwrought romantic thriller with no subtlety and little in the way of plausibility. But Lyne, working off of a screenplay by Alvin Sargent (Ordinary People) and William Broyles Jr., along with the novel The Unfaithful Wife by Claude Chabrol, opts for a slowburn, intimate approach that shows how two well-to-do, level-headed individuals can fall down a well of bad choices and undesirable outcomes that paradoxically push them away from one another while practically stitching them together as cohorts.

For the most part, Unfaithful dials down the sensationalism of the story. It could’ve turned into a seriously bonkers thriller, but Lyne is more fascinated by showing how Connie and Edward succumb to this swirling cloud of deceit and infidelity. Sargent and Broyles Jr. offer no easy heroes nor easy villains. One can dislike Connie’s choices, but it’s harder to paint her as an objectively bad person. She’s a bored woman with desires she doesn’t know she has, largely because her marriage has become one that is defined by the necessities of life, regardless of how banal they seem: go to work, send the kid off to school, make dinner, and maybe read while you bathe. Something often has to give.

Unfaithful is a film defined by the tired and worn facial expressions of its characters. Gere and Lane are captivating almost solely on the basis of what they don’t say. Lyne, who directed the grimly haunting Jacob’s Ladder as well as the more comparable Fatal Attraction, lets his camera linger on their expressions we can interpret as exhaustion, nervousness, bliss, relief, or pensiveness, and the hallmarks of his pictures are on full display here. Lyne typically goes for dark, moody aesthetics that allow the kind of impressionism that is facial expressions to feel enhancing to the story as opposed to empty. It’s also when he goes to profile the more intense emotions of the characters that he mines his talented actors for passion and tension in a way that lacks the cartoon explosiveness Unfaithful could’ve had. While it might’ve been interesting if Sargent and Broyles Jr. allowed their characters to take a more confrontational approach at one another, that could’ve led to the theatrics the film, outside of its inky-black visuals, lacks. It leaves me torn, but from what I’ve seen from Lyne, I feel he made not only the right choice, but also the appropriate one.

Unfaithful could’ve been Lyne going not where the puck was or wasn’t as a director, but where it had once been. Upon its release in 2002 (to date, Lyne’s last directorial effort), Fatal Attraction was 15-years-old, and Unfaithful, had it not been for the film’s many strengths, would’ve likely been seen as an inferior clone of what Lyne had not only done but mastered many years ago. There is a different kind of meat to this story, however; one that shows how arbitrary infidelity can be and how even if you minimize some of the suspenseful elements of a story, you have an entirely different one that works on its own merits.