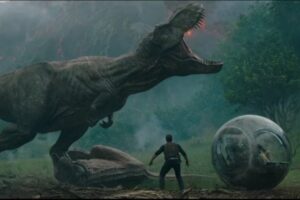 It’s fair to call Jurassic World: Fallen Kingdom the Last Jedi of this “new” franchise. Following what was tailor-made to be a crowdpleasing thrill-ride for all ages and generations, this sequel presents the fork in the road for any future installments. In Fallen Kingdom, political quandaries, ethical conundrums, and dimly lit action setpieces infest the screenplay of a film in which dinosaurs are misunderstood martyrs. Maybe that’s what you think you’d enjoy from a new Jurassic, but after five movies over the course of 25 years, I’m out like a concussion on all future films.

I had no idea the original Jurassic World would be such a success. Here I was the schmuck predicting what would be a $200 million+ opening weekend in America would be a mere $100 million debut, give or take a few bills. After several months of impressively sustained success, the film somehow propelled itself to $1.6 billion and is one of the top five highest grossing pictures of all-time. I found it to be a pretty entertaining affair, largely because through saturating the screen with CGI mayhem, its theme park setting was a lovely callback to the original Spielberg adventure that started it all. The versatility of the dinosaurs as well as the extended action sequences, I admit, were fun because they had been extinct for so long. But naturally, a billion dollar success needs a billon dollar followup, and though Jurassic World: Fallen Kingdom bravely tries something weightier, it smothers the childlike enjoyment one gets from seeing danger unfold on-screen without ever being in danger. In turn, we’re left with a bloated, boring blockbuster as soulless as a plastic dinosaur.

The film opens with a BBC News briefing catching us up on a heated debate between animal rights activists and opposing parties regarding what should be done about dinosaurs. Noteworthy voices such as Jeff Goldblum implore that the best thing to do would be to leave the dinosaurs confined on an island where an imminent volcanic eruption would render them extinct. Activist Claire Dearing (Bryce Dallas Howard), on the other hand, can’t bring herself to let the titanic creatures be bathed in smouldering hot lava, so she visits the wealthy Benjamin Lockwood (James Cromwell) and his assistant Eli Mills (Rafe Spall), who have a plan to rescue the dinos from danger. Blinded by the idealism that as made her as impulsive as a kid in a candy store, Claire goes along with their shady plan, recruits her old confidant Owen Grady (Chris Pratt) and a team of tech wizards and Paelo-doctors (Justice Smith, Daniella Pineda), and ventures out to the island amidst the violent explosion in order to do the right thing. Intermixed in this cacophonous search-and-rescue effort is Toby Jones, an exorbitantly rich stiff who foresees becoming exorbitantly richer upon holding a dinosaur auction, and Maisie (Isabella Sermon), Lockwood’s granddaughter with an unusually sound moral compass and talent for getting out of trouble.

The film was directed by J. A. Bayona, whose background in TV has ostensibly made him only more deft in capturing a variety of natural disasters and unorthodox creatures so smoothly on film. His emotional disaster flick The Impossible and his engagingly heartfelt A Monster Calls were both dimensional and affecting, all the more significant given they belong to genres where those descriptors are ordinarily not applicable. Bayona remains strong in the sense that he keeps the circus of events from getting bathed in a fog of muddled confusion, yet Colin Trevorrow and Derek Connolly’s script have him restrained like a dinosaur in captivity. Given the heights this franchise once achieved in the dynamic realm of visuals and human interest (not to mention the decisively unsung realm of “creature interest”), watching a plethora of indistinguishable, screeching monsters in cages is about as entertaining as it sounds.

The creatures are too close to their home in the screenplay, for they’re pawns in a film that favors of the surrounding boardroom conversations about their place in the world as opposed to observing what they actually do. Even the weaker installments in the original trilogy basked in the element of discovery, something that’s all but removed in a cloying, loud, and overlong montage of grim lunacy. If you go into the film unsure of how you feel about the depths of dinosaur politics, the script nor characters in Fallen Kingdom will persuade you to care. Howard and Pratt lose any charisma they maintained in the predecessor, and the new characters are shallow shells of even their most stereotypical selves. For example, Claire should be smarter than falling for a half-baked plan from someone like Eli, and audiences should be given stronger emotional attachment than someone like Maisie, whose puppy-dog face and proper English dialog serve to manipulate emotions instead of illustrate a gentler perspective. Finally, although Claire and Owen believe all dinosaur lives matter, they keep screaming about their now-grown-up friend Blue, who, even with the streak of blue scales, is rendered interchangeable by the odious, smog-filled hues of black and blacker.

It’s one thing when a “dumb movie” embraces its sillier qualities and clearly desires to give audiences little else besides a good time at the movies. Even some of the most egregious displays of nine-figure budgets, I can accept that footnote on a very surface level. But when a would-be competent film like Jurassic World: Fallen Kingdom shows its dumb side while masquerading as smarter than it is, one can see through its ruse like a bottle of vodka. The kingdom has fallen, and with that a touchstone of popular culture has been cheapened one time too many.