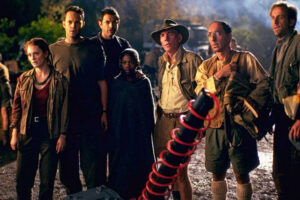 Despite having perhaps one of the worst sequel titles in film history, The Lost World: Jurassic Park winds up being a favorable dinosaur outing. One of the pleasant things about the Jurassic Park franchise is that dinosaur films are few and far between, which allows for the ideas and sequences in these films to remain mostly fresh. There’s little interference with “been there, done that” responses to action setpieces, nor is there a general cynicism to the tones of these films or the imagery (which gets especially moodier in this film). The wonder and elements of peril are still firmly instilled in Spielberg’s direction and David Koepp’s screenplay, making for a film that continues to really emphasize the thrill of its predecessor through nearly every scene.

We focus on Ian Malcolm (Jeff Goldblum), who is hired by InGen CEO John Hammond (Richard Attenborough) to document the activities of the dinosaurs on Hammond’s second Jurassic Park site after the terrible breakdown of his first site before financiers close the second park. Initially apprehensive, Malcolm turns compliant when he sees his paleontologist girlfriend Sarah (Julianne Moore) packed up and ready to go, in addition to his daughter Kelly (Vanessa Lee Chester) from his first marriage. On the trip, Malcolm winds up meeting an ecological film crew run by Vince Vaughn’s Nick as well as a famous hunter known as Roland Tembo (Pete Postlethwaite). As expected, however, the same catastrophe that occurred in the first park repeats itself with the second, making for a frightening and dangerous experience for the long-suffering individuals who recall Jurassic Park’s initial failure all too well.

The sole thing The Lost World does better than its predecessor is give us a group of more interesting characters and character actors. Seeing Goldblum, Moore, and Vaughn work off one another in a way that channels misfit tendencies very nicely is something to relish, for seeing all these actors in such a goofy, fun-loving project makes the price of admission already worth it. This band of characters, while still not entirely fleshed out, is still a lot better than the marginally amusing cast of characters from the first movie, which benefited largely from the effortless charisma of the everyman Wayne Knight.

Still instilled in The Lost World from the original Jurassic Park film is the film’s desire to keep us feeling constant danger and uncertainty. Jurassic Park‘s main attraction, besides state-of-the-art special effects, was the fact that it always made us feel at the mercy of enormous, hulking dinosaurs, regardless of where we tried to hide (or where the camera place us). Spielberg clearly capitalizes on this principle with this particular film, giving us the feeling of minimal safety he did with not only this film’s predecessor, but his other projects like Duel and Poltergeist.

Then there’s the element of darkness in this film that’s significantly more present here than it was in the first film. Rather than encapsulating the common attributes of flashy, summer blockbusters, The Lost World finds itself assuming a moodier state of mind, actively showing innocent bystanders consumed by dinosaurs, young people mauled by baby dinosaurs, and more. There’s a flood of action and suspenseful sequences that really amount to some fully realized events in this film. Consider the scene when Kelly performs a complex gymnastics routine to save Malcolm and Sarah, or when the dinosaurs are attacking the film crew and Malcolm works to rescue them.

In some ways, The Lost World finds ways to be more engaging than Jurassic Park. Its moodier style further exploits the dangers of dinosaurs, and the repeated peril that humans face when trying to assimilate to their world. The Lost World: Jurassic Park continues to affirm this frightening realization while remaining a thrilling piece of blockbuster entertainment, never squandering the opportunity to be dark and violent but also peppering in the occasional one-liner (some funny, some cringe-worthy) for good measure. Much like its predecessor, this is ultimately a variation on the summer blockbuster done well and in a consistently enjoyable manner.