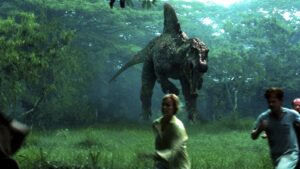 I mentioned in my review of The Lost World: Jurassic Park that it would be difficult to call a dinosaur film, at that time, at least, “routine” or cliché because of how rarely dinosaurs were put on film. With Jurassic Park III, however, we now have two very capable films to compare this one to, and this, on top of several issues this installment bears, work to not only derail a franchise that had fairly solid footing in the ground but managed to defy odds to become one of the few defining films in American history for its special effects.

Jurassic Park III can’t manage to conjure up the same kind of danger that the original film did, nor the moodiness and the energetic cast of misfits of the second film. It plays like a theme park ride, with little sense of danger and a heavy sense of perfunctory happenings that simply occur in without much added spark of ingenuity or creativity behind them. Where Steven Spielberg had a method to his madness, and a terrific sense of buildup in both of his films, director Joe Johnston and writers Peter Buchman, Alexander Payne (yes, Election and Sideways Alexander Payne), and Jim Taylor simply stumble when trying to find a route to take with Jurassic Park III that works and breeds new life into material that’s beginning to show signs of wear.

We refocus on Dr. Alan Grant (Sam Neill) of the first film, who is now refreshed with the events of Jurassic Park out of his mind. Despite saying he has no ambition to return to a life involving dinosaurs, Dr. Grant meets a man named Paul Kirby (William H. Macy) and his wife Amanda (Téa Leoni), who cut him a blank check to give them an aerial tour of the island of Isla Sorna. He reluctantly agrees until, while on the plane, realizes that the Kirby’s want to land on and explore the island, resulting in a plane crash that leaves the three of them, plus Grant’s son Billy (Alessandro Nivola) and a handful of Kirby’s men, stranded in a playground filled with dinosaurs. Worst of all, many of the dinosaurs are Pterodactyls, soaring menaces that hunt for prey on the ground before scooping them up and taking off without a trace.

The Pterodactyls steal the show in this film, for they are the ones who are unpredictable, quick-witted, and more entertaining to watch than the group of misplaced actors on display. The Lost World had the likes of Jeff Goldblum, Julianne Moore, and Vince Vaughn, all actors you wouldn’t think would star in a Jurassic Park film, but somehow found their way onto the set and decided to make due with what they had. In turn, they turned into be a cast of likable character actors, making for one of the most surprisingly functional misfit casts I have yet to see.

Jurassic Park III, on the other hand, is what happens when a series of actors find themselves working together and something feels off. It’s not really an involvement thing, but there seems to be a general level of discomfort amongst the actors; actors like Macy and Leoni seem terribly out of place with a film like this, and no character, not even Grant, bears any likability throughout the course of the film. The original Jurassic Park had its share of empty characters, but at least devoted enough time to them to show that Spielberg and company were trying to provide audiences with an even balance of talking and action, whereas The Lost World found a way to more-or-less balance the dichotomy out to a rather effective level. Jurassic Park III can’t seem to do either very convincingly; it’s too busy trying to set up the next action sequence when it focuses on the characters and is too busy looking for an easy way out during the action sequences.

Finally, there’s the emotionally manipulative angle that comes up with this film too, particularly in the ending, which ties everything together with a very incredulous circumstance combined with cloying choral music to let us know that everybody involved is safe and sound. This kind of thing only works to soil the scope and power of the original film and the kind of dark, brooding atmosphere The Lost World bravely built. The special effects are still strong, only this time, merging CGI with animatronics leaves a bit of a hokiness to the dinosaurs, particularly the Velociraptor, which bears a feathery coat (while this may be more scientifically accurate, it looks messy and unbelievable on-screen). Where the other two films were creating a powerhouse franchise in film, Jurassic Park III is looking for a quick buck, and that part is evident from the cast choices, the writing, and the general feel, all of which feel significantly squandered and traded in for something convenient rather than daring.