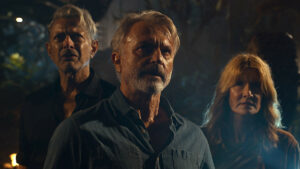 Just how soulless is Jurassic World as a franchise? Well, if you watch the latest installment at an AMC, you’ll be treated to a needless crossover promo just before the opening studio logos featuring dinosaurs and Minions. It ends with a title card that says “see you for Minions: The Rise of Gru next month.” I’ll make it a point to be busy that entire weekend.

The unwritten law of American cinema evidently suggests that merely two weeks after we get one of the best blockbusters in half a decade, we get a good candidate for the worst one of the year. Jurassic World Dominion is a lumbering, mostly joyless experience; a fitting complement to its misguided predecessor, Fallen Kingdom. J. A. Bayona’s nine-figure miscalculation did at least inspire some optimism with its ending, as dinosaurs were unleashed onto the entire world. That seemed like an appropriately hellish and deliciously chaotic premise for Colin Trevorrow to run with upon signing on to return as director.

Like the first Purge movie briefly showed us all the mayhem unfolding in the streets before confining us to a wealthy family’s concubine, Jurassic World Dominion opens with an amusing-enough “NowThis News” segment showing life on Earth as humans and dinosaurs are (shockingly) having difficulty existing in harmony. After that, it becomes clear in the first act that we will not be on the streets with these menaces. We’ll instead be reunited with the perpetually faceless characters of the new movies and the fondly remembered legacy players (drained of their personalities), the latter of whom have become whistleblowers for, get this, another slimy corporate conspiracy. That corporation is Biosyn Genetics, run by Dodgson (an overqualified Campbell Scott). He’s content with dinosaurs being a leech on the environment so long as he can make a buck. It’s Dr. Ellie Sattler (Laura Dern) who suspects he is behind the swarms of genetically altered locusts responsible for feasting on a bounty of American crops, putting the country’s food supply in grave danger. Ellie finds Dr. Alan Grant (Sam Neill) to join him in infiltrating Biosyn to uncover the necessary evidence. Her “in” happens to be chaos theorist Dr. Ian Malcolm (Jeff Goldblum, the only one who earns his chuckles).

Malcolm has not only been working at Biosyn for six weeks, he’s apparently figured out Dodgson’s master-plan and obtained keys to all the top secret rooms in the meantime.

Then there’s Owen Grady (Chris Pratt) and Claire Dearing (Bryce Dallas Howard), who are hiding out in the Sierra Nevada mountains, concealing their young clone daughter Maisie (Isabella Sherman) from the world. Claire makes an effort to stop illegal dinosaur breeding farms while Owen is essentially a dino wrangler in Levi’s. Maisie understandably resents her life of confinement. She gets some excitement when Dodgson kidnaps her, leading Owen and Claire to Malta, and eventually to Dodgson’s massive island.

I spent a good five minutes pondering what this movie might’ve looked like had Owen, Claire, and Maisie not been in it at all. Sattler, Malcolm, and Grant — even as shells of their once charismatic selves — are proven in their ability to carry the human side of these films, and their reuniting, while contrived, is far more interesting than anything the aforementioned three are tasked with doing. The new trio has exactly one inspiring sequence as they’re flying to Dodgson’s lair. A pterodactyl (I think) attacks their plane and blows up their engine, causing a deep dive straight into frozen water. Owen gets Claire to eject with her seat-parachute. As soon as she jets through the now-exposed roof, the camera fixates on her reaction as she jolts upward, then down to the surface. Until another flying dino shreds her parachute and she’s back to her downward spiral.

It’s a riveting scene; one with some stylistic flare too. It’s one of many elements otherwise missing from Dominion. 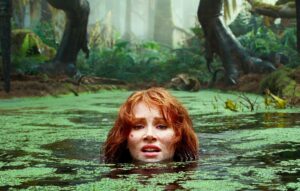 The so-called “epic conclusion of the Jurassic era” feels perfunctory. Before you insist that it’s a harmless work of “dumb fun,” consider the recent Planet of the Apes trilogy, which managed to merge the smart and the spectacle with an involving narrative. When screenwriters Trevorrow and Emily Carmichael aren’t shuffling their characters to the next location — just for the two groups to meet and yuk it up more than anything — Dominion regurgitates empty platitudes about the dangers of unchecked science. Yet again, we witness dinosaurs traverse vast landscapes in seconds, but they still somehow can never catch humans driving a Jeep at under 100 mph.

At some point, we have also have to ask ourselves, why can’t Owen just hop out and extend his hand to center the beasts? He seems awfully good at that when he tries.

These movies used to be fun. But the narratives in Fallen Kingdom and Dominion have tethered themselves to reality in such a way that we’re forced to watch once-charming, thoughtfully brainless movies attempt to be intelligent. Trevorrow’s directing adopts the sensibility of a hired-hand who can be trusted with the latest piece of IP and not do too much damage in the storytelling department.

On that note, Jurassic World Dominion is the franchise’s Rise of Skywalker. It will top the box office in consecutive weeks. It will rake in hundreds of millions, maybe even a billion. Then, it will be promptly forgotten, all but extinct if not for when it plays on cable.