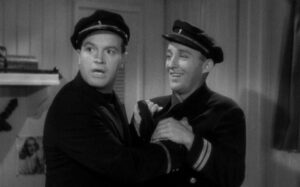 The history of comedy would certainly be different had Fred MacMurray and Jack Oakie signed on to do Road to Singapore, as Paramount originally intended. George Burns was also in consideration for one of the male co-leads, but later declined. Not even Dorothy Lamour was the first choice in the minds of the suits at the time. Bing Crosby and Bob Hope had a great thing going on Hope’s radio show. They had the banter down to a tee, along with the recurring friendly feud they played up for the airwaves. It was a match made in comedic heaven. A fruitful partnership that further launched both into stardom and Paramount into the cinematic juggernaut they remain today.

Road to Singapore was the first of seven installments in the still-renowned comedy franchise built on simple premises that permitted both Crosby and Hope to showcase their impeccable timing as performers. In this inaugural go-round, the two play Josh and Ace, respectively. They’re two single sailors who return home to see their shipmates run into the arms of their wives; some are over-the-moon at their arrival, others are aghast to see them posing with floozies during their service. Josh and Ace are free of such concerns and make a pact not to fall prey to the lustful eyes of a dame.

Tests of faith find them not long after they dock. While Ace is greeted by a former lover, who insists on marriage, Josh’s shipping magnate father (Charles Coburn) encourages him to marry Gloria (Judith Barrett). Like true adults, the men flee to Singapore to escape temptation, only to then be tempted by Mima (Dorothy Lamour), a beautiful dancer that has them smitten. Josh and Ace rescue her from an abusive dance-partner (Anthony Quinn) and give her a place of refuge only for her to begin running their lives.

Road to Singapore has the right amount of plot to justify the antics that ensue. Some of the great Crosby/Hope gags are born in this installment, including the famous “patty cake” bit that involves the two playing the coordinated-hand game just before igniting a brawl with hopes of escaping. Then of course, you have the songs, which punctuate the zaniness perfectly. I especially enjoyed Crosby’s rendition of “Sweet Potato Piper,” which invites Hope and Lamour into participate as they try to entertain a plethora of Singaporeans.

In any buddy movie, there’s the inevitable conflict that leads to a brief separation between the two co-leads. It’s one of the most obvious tropes you can find in cinema, often punctuated by some listless sulking from both parties until the two realize they can’t live without one another before making up. In Road to Singapore, Josh and Ace never truly separate. Writers Frank Butler (who would pen four “Road to” films) and Don Hartman smartly spare us this inevitability by roping friction into the narrative. Josh tells Mima that Ace is a caddish womanizer before buddying up to him the next moment the two reacquaint. Ace tells Mima that he’s the only friend Josh has, and without him, he’d be screwed. It’s a more realistic scenario amongst two lifelong friends. Throw in a woman to compete for their hands and all bets are off.

Under the measured yet freewheeling hand of Victor Schertzinger, Road to Singapore is liable to win you over rather quickly with its snappy comedy and delightful twosome. It’s rougher around the edges than later installments (Road to Morocco finds the duo hitting their comic strides with a great roster of songs and corresponding gags), but all great franchises start somewhere. This one began with a bang.