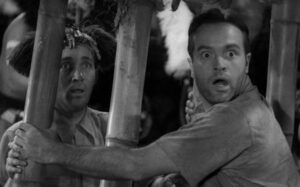 When Road to Singapore became a massive critical and box office hit in 1940, grossing a then-enormous $1.6 million, not merely a sequel, but a string of films featuring the effervescent duo of Bing Crosby and Bob Hope were imminent. The next stop on the world map would be Zanzibar, just barely a year after its predecessor’s release.

Road to Zanzibar has Crosby and Hope playing Chuck and “Fearless,” respectively, while also switching personalities. Whereas Crosby was the straight-man in Singapore, and Hope the bumbling comic relief, Crosby’s Chuck is the impulsive half of this con-man duo. The two are a part of a traveling sideshow circus that has Chuck organizing the stunts and Fearless the victim of his partner’s big ideas. When Fearless — or rather, a dummy — is launched out of a cannon subsequently setting a circus tent ablaze, the two flee to Zanzibar to start life anew.

Life anew consists of Chuck blowing their earnings on a worthless diamond mine sold by a tycoon (Charles Kimble), selling off said mine, then rescuing a pair of young dames, Donna (Dorothy Lamour) and Julia (Una Merkel), who are being auctioned as slaves. What Chuck and Fearless fail to realize is the women themselves are tricksters looking to obtain money for food. The two men are just the type of saps to go along with their scheme.

To see Crosby initiate the problems as opposed to Hope is the first glaring difference with Road to Zanzibar. You get the sense that this fledgling series was still a work in progress even into its second feature, and returning writers Frank Butler and Don Hartman were still experimenting with the formula. Regardless, Zanzibar is rife with wordplay. When Chuck encourages Fearless to fight an octopus, Fearless balks at the idea of getting sprayed with ink. “You can wrestle and write home at the same time,” Chuck reassures him. At another point, the two are wandering waywardly across a barren field of nothing when Fearless remarks, “this must be the nowhere everyone is 500 miles away from.” The odd note about that is with Chuck being such a semantics-nerd (always correcting Fearless for his use of “who” as opposed to the more proper “whom”), he doesn’t bat an eye at the hanging preposition in that sentence.

This is a comic work to be taken lightly, as you can infer. Yet it does fall short of the standards set by Road to Singapore, which found a rare yet delicate balance of being both plot-conscious while lenient enough to accommodate the antics. Road to Zanzibar comes across as dryer, more plot-minded than anything. More jokes miss than they do land. I couldn’t help but feel the setting of Zanzibar was underused as well, save for a ridiculous climax involving Fearless and a giant gorilla that will go unspoiled by me.

One element these films continue to master is the art of fourth-wall breaking, something many films/shows often misuse. The trick is getting audiences invested in the world before winking at the audience. There’s a fun moment here where Crosby and Hope perform their “patty cake” gag, in effort to distract onlookers before socking them in the kisser. Just as they begin to play their little game, it’s broken up and the two are apprehended. “He must’ve seen the first picture,” Chuck yells.

Road to Zanzibar is predicated on a plethora of small moments. For some, it might amount to a stronger whole. It’s not a bad way to spend an afternoon at all.