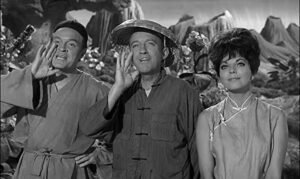 The Road to Hong Kong — the final installment of the eminently successful Road to… franchise, which ran for 22 years — opens with a small tribute to the previous six films. Bing Crosby and Bob Hope, both 58-years-old during the production, kick things off by performing a fitting tune by the name of “Team Work,” hailing their collaboration on which the franchise was erected all the way back in 1940. You can tell age has caught up with both men, but not at the expense of their passions. In their hearts remains the spirit of vaudevillian showmen committed to their craft.

But a combination of age, slowness, and overall tedium rear their heads early in what is the final, tired breath of a franchise lucky to have lasted as long as it did. Arriving a whopping 10 years after Road to Bali (the longest gap between installments), The Road to Hong Kong is the first to add an inessential article to the title and the first not to be produced by Paramount (instead, United Arts). On top of the aging Crosby and Hope pulling off their roles with less credibility this time around, it’s unbelievably disingenuous for another studio to dig up a nearly moribund property only to replace the leading lady.

If you want a distillation of Hollywood at the time (and sadly, today as well): two 58-year-olds reprising their co-lead roles in a rapid-fire comedy is acceptable, but a 48-year-old dame in Dorothy Lamour is too much to handle. For the first time, Lamour’s headlining role is replaced. Even the most casual viewer of this series should detect there is a spark missing, and it’s one not merely ignited by her appearance in an extended cameo.

Crosby and Hope play Harry Turner and Chester Babcock, two older vaudeville performers with a dead-end act. A little too meta, if you ask me, but so be it. The two men decide to embrace the life of con-men, at least until Chester is stricken with amnesia following an accident. He can’t recall his own name much less that of his partner’s nor their long-standing relationship. An Indian doctor (the great Peter Sellers) informs Chester that quite possibly the only way for him to regain his memory is to pay Tibetan monks a visit.

At the airport, Chester mistakenly grabs the wrong suitcase. The one he grabs belongs to a spy organization called “The Third Echelon.” Diane (Joan Collins), a secret agent for the Third Echelon, is tasked to relay plans of stolen rocket fuel in tow to Russia to a man with a suitcase. So, of course, that man is Chester. Once Chester’s mind is restored, him and Harry find themselves thrust into the world of space travel.

Joan Collins simply doesn’t bring the level of charisma of Lamour, but how could she? This is her first rodeo in what was ultimately the conclusion of a franchise with three A-list mainstays. Apparently, Hope refused to do the film unless Lamour was involved, and her extended cameo appearance was the compromise. That’s a shameful way to treat someone as integral to the success of the series as the two leads. Like a great deal in The Road to Hong Kong, her role is underdeveloped. Crosby and Hope even appear bored and slightly embarrassed by the direction of the screenplay. Their youthful energy has waned considerably, and what’s left is a scattershot picture helmed by a director in Norman Panama who occasionally doesn’t seem to realize when a joke should begin nor when it should end.

The Road to… franchise not only went on longer than even the most optimistic suits at Paramount would’ve thought, but it also was more successful in a creative sense than one could’ve projected. It’s a testament to the dynamic team of Crosby and Hope. Both found ways to compliment one another no matter where the narrative took them. The Road to Hong Kong attempts to capture the magic, but what it’s missing is that youthful freshness that permeated the series even into the fifth installment, Road to Rio.

This odyssey was no less filled with more highlights than lowlights. For that, to Crosby, Hope, Lamour, and everyone involved: a sincere thanks for the memories.