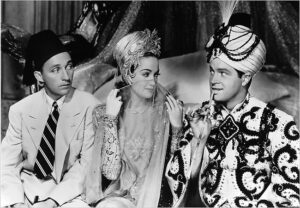 It’s little surprise that Road to Morocco is considered the best of the seven-film Road to… series. From the beginning, everything from the chemistry of Bing Crosby and Bob Hope to the refined plotting impresses on levels merely teased by its predecessors. In the modern day, we’re used to the steak having substantially less sizzle with each passing sequel. Seeing as comedy can sometimes age like milk makes Road to Morocco that much more commendable.

In this third go-round, things open with Jeff (Crosby) and Orville (Hope) stranded on a pile of wreckage following the explosion of a freighter at sea. The two wash-ashore in the country of Morocco, where it takes but no time for Jeff to sell Orville into slavery in order to buy food. Lucky for Orville, it’s one of the smartest moves his pal has ever made. Orville becomes engaged to Princess Shalmar (series mainstay Dorothy Lamour), much to the chagrin of her family. A trusted group of astrologers have informed her that her first husband will die a violent death, leaving her to marry her real beloved, Sheik Mullay Kasim (Anthony Quinn).

A gut-buster of a scene transpires when two mooks try to fit Orville for his coffin and gather information for his inevitable tombstone while trying (and failing) to be subtle. Meanwhile, things become ever more hairy when the princess instead falls in love with Jeff, coupled with the all-knowing astrologers realizing they’ve made a mistake in their predictions and that whomever she marries won’t perish after all. This turns Jeff and Orville’s friendship on its head as they attempt to remain vigilante in a foreign land with no one to trust but one another. And even then, that and a bus token as they say…

The energy with Road to Morocco simply feels different compared to both previous outings in Singapore and Zanzibar, respectively — although both pictures had their own noteworthy merits. But where Road to Singapore‘s direction felt pedestrian and Road to Zanzibar underutilized its setting, Road to Morocco finds everyone functioning comfortably in their prime. This is first evident during the performance of titular song, the best of the series thus far as it encapsulates the trademark humor of the franchise.

“For any villains we may meet, we haven’t any fear,” Bing sings as the duo ride atop a camel through the Moroccan desert. “Paramount will protect us cause we’re signed for five more years,” Hope adds to the couplet, quickly flashing the “peace” sign to signify a possible contract renegotiation will come due before then. Prior to that verse, the two take a subtle jab at the Hayes code of the era, alluding to the fine-line screenwriters Frank Butler (who wrote Wake Island the same year, both films receiving Oscar nominations for Best Writing) and Don Hartman had to walk in outlining the ensuing chicanery.

Family Guy-loyalists might recall the tune being parodied in the episode “Rhode to Rhode Island” — one of the finest episodes of the entire series — when Brian and Stewie are aboard a train back to Quahog following a journey to Brian’s homeland to see his mother. The episode was the first in the series to mimic the Road to… franchise in plotting and interpersonal exchanges. To date, there are eight episodes in the series-within-a-series.

Things get so out of whack that, at one point, a camel looks directly into the camera, and breaks the fourth wall with one line: “This is the screwiest picture I was ever in.” Truer words have seldom been spoken.

It’s hard to believe that Paramount’s goldmine at the time was a handful of pictures predicated upon Crosby — at the height of his popularity both in acting and music — and Hope ramblin’ and amblin’ in one random locale after another. Held together by the versatile direction of David Butler, who adjusts to a copious amount of locations seamlessly and an affectionate chemistry between its leads, Road to Morocco proves that some series, if given time to breathe and maturate, can find their stride regardless of the sequel number. It also helps when the concept is quality enough to warrant multiple entries.