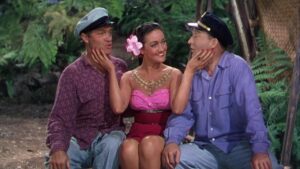 Road to Bali marks the first and only installment in the long-running series that was presented in Technicolor. It adds something of a dimension to the picture. For one, the erupting volcano wouldn’t look nearly as attractive had in been captured in black and white, and the vibrant hues of Australia add a visual pop. Seeing some details enhanced by the palette do their part in masking the fact that this is where the Road to… movies began to dip in quality.

Arriving five years after Road to Rio, Road to Bali drops us into Melbourne where two vaudevillian performers, George (Bing Crosby) and Harold (Bob Hope) — very Captain Underpants-esque, which I appreciated — are run out of town after their stage-act goes awry. It recalls the set-up for Road to Zanzibar, where Hope’s “Fearless” was launched out of a cannon only to set the entire tent ablaze.

George and Harold hop aboard a train after being chased by the fathers of the two girls they were romancing. They end up in Port Darwin, donning beards and looking for employment. Prince Ken Arok (Murvyn Vye) decides to employ them as deep-sea divers in search of sunken treasure; George and Harold learn the hard way that at the bottom of the ocean lurks a gigantic, man-eating squid. The job has cost four men their lives, but at least it leads them to meeting the pretty Princess Lala (Dorothy Lamour in her final starring role in the series). Lala gravitates towards George, but fancies Harold if for no other reason than he reminds her of a chimpanzee with whom she connected as a child.

Conversely, it reminded me of times when I’d head to a local bar with a buddy and I was the one reminding a woman half as pretty as Lamour of her childhood best friend, or heaven forbid her brother.

The performative aspects present in Road to Rio have been traded for more globe-trotting. An on-screen map details George and Harold’s odyssey while the screenplay (written by the trio of Hal Kanter, William Morrow, and series-mainstay Frank Butler) breathlessly thrusts them into a plethora of Marx brothers-esque situational comedy.

Road to Bali is too loose for its own good at times. Its structure is inhibited by what appears to be a mental competition taken up by the writers to cram as many jokes and sight-gags into the script as possible. It’s also about this time that the series has begun to wear out its welcome. Crosby and Hope are still an electric comic duo, but their shenanigans feel familiar to those who have stuck around for this long. If this is your first time on the “Road,” so to speak, you might have a more positive response. At some points during Road to Bali, however, I was prepared to turn around.

I love this film. Own it on DVzd