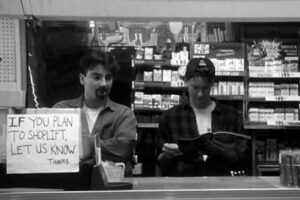 I wrote a (poorly written) review of Clerks back in 2011, shortly after I began writing film reviews. In lieu of the release of Clerks III, I wanted to revisit/re-review several View Askewniverse movies. Here’s my take on what I consider to be my favorite movie of all-time.

“What is your favorite movie?” They ask. “I get that a lot,” I say. And my response each and every single time has me mentioning Clerks in some capacity.

Asking a film critic their favorite movie is like me asking you, “what’s your favorite song?” It depends on your present mood, your current fixations, and sometimes, it isn’t always your “most played” on Spotify. I used to refuse to answer the previous question under the self-manifested pretense that I’d be putting said movie on a pedestal to which all others must live up. Logically, I probably should say Citizen Kane or The Godfather are among my favorite movies, like other critics.

But I’d ask those same critics this question: when you come home from a long, crappy day at the office and you want to do absolutely nothing but stare at the TV screen — do you really want to watch Citizen Kane? Be honest.

A favorite movie, to me, might not be high-art. It might not even be “good,” as nebulous as that term is. To me, a favorite movie is one you can watch again and again and it always puts you in a positive mood. In fact, it restores your mood, and maybe, most importantly, gets your mind off the world for a little while. On that note, Clerks is my elixir. It’s easily the movie I’ve seen the most in my life, and it’s one that fundamentally changed my perception of what movies could be. Seeing it for the first time at the tender age of eight-years-old got me to realize that movies didn’t have to have massive budgets, complex plots, wizards, superheroes, pyrotechnics, or even actors I knew and recognized. A movie could be a black-and-white slice-of-life comedy about two slackers jocking a register at some fucking local convenience store instead of working at a steady job. Loosely based on The Divine Comedy by Dante Alighieri and divided into nine chapters, as if to signify the nine rings of hell from Alighieri’s famous piece, Clerks revolves around Dante Hicks (Brian O’Halloran), a 22-year-old college dropout who is called into work on his day off. For eight or more hours a day, he mans the counter of Quick Stop, your average convenience store in Leonardo, NJ. Next door is RST Video, a humble video store, where Randal Graves (Jeff Anderson), Dante’s best friend, works. RST spends more time closed than open, as Randal frequently heads next door to spend time with Dante.

If that’s not the dream in your early twenties, I don’t know what is. I’m just bummed I never got to live it.

Moreover, Kevin Smith’s feature debut revolves around anything but an average day in the lives of these two likable but deeply flawed individuals. Dante’s current girlfriend, Veronica (Marilyn Ghigliotti), tries to encourage him to go back to school, but he’d much rather try and reconcile things with his previous girlfriend, Caitlyn (Lisa Spoonauer), for whom he still carries a torch. Despite having late-night phone-calls with her as of late, Dante finds out via newspaper that his ex is engaged. Beyond that, he finds himself at the center of an anti-smoking mob, learns another schoolmate died, gets screwed over by his boss, and, lest we all forget, someone jammed gum in the locks of the shutters. If that’s not bad enough, there’s plenty of unruly customers to attend to.

He’s clearly not even supposed to be here today.

It’d all be so damn sad if it weren’t so damn funny. A young, aspiring, cash-strapped filmmaker, who maxed out credit cards and sold his beloved comics collection to get the $27,000 — most of the budget went to licensing select Alice in Chains, Soul Asylum, and Love Among Freaks songs, mind you — necessary to make a film at his then-day-job, Kevin Smith’s proclivity for intimate banter amongst friends was on display from the jump. Smith drops you in this world of convenience, where Gatorade and cigarettes are within arm’s reach and a prick chastising you for being out of shape just so happens to be Rick Derris, a guy you sorta knew in high school. There’s a term for this kind of movie and that term is “lived-in.”

Let’s talk about Dante and Randal, who I realized early on were two halves my complete personality. The occasional browbeating complainer in me is Dante, who is sometimes too scared to make the metaphorical leap into bettering his personal situation. The sarcastic side of me who loves a good “bad” joke and lives to make people laugh is Randal. After spending merely 90 minutes with these two characters, rarely without the other by their side, it’s not unorthodox to believe that they couldn’t exist without one another. As far as I’m concerned, they’re the singular best buddy duo ever to exist in a film. They’re frightened by change, vulnerable by nature, cocky in the way men in their mid-20s so often are, and can go from venting about life to debating the subtle politics of Return of the Jedi at the drop of a hat. 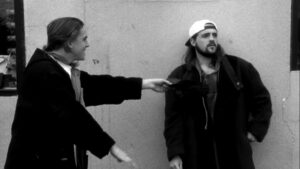 The dialog is the real star of Clerks, delivered convincingly by a cast of mostly nobodies and Smith’s closest friends at the time. It was also the debut of Jay and Silent Bob (Jason Mewes and Smith, respectively), who’d go on to be the contemporary Cheech and Chong in the realm of stoner icons. The eminently quotable pair planted their flags here, and after more than 40 watches, I still contend that Silent Bob has the most meaningful line in the movie.

This is likely not my last time writing about Clerks. It’s already, technically, my third time writing a review of the movie, having been dismayed by my poor writing the last couple cracks. It remains the movie that means the most to me because it showed a weird, eccentric, and lonely eight-year-old that movies were the ultimate window. If they could be a scuzzy, black-and-white window into the lives of middle class minimum wage workers in a blue-collar town, who thrive on making the same weed, dick, and fart jokes I liked to make with my friends, then they could truly be anything.

I watched Clerks the day before I started college. I watched it after my first heartbreak. I watched it days after my mom died. I might have even shifted my plans when I caught it on TV once or twice. If I’m watching Clerks, I’m doing what I should be doing, as far as I’m concerned.

NOTE: As of this writing, Clerks is streaming on Pluto TV, free of charge.