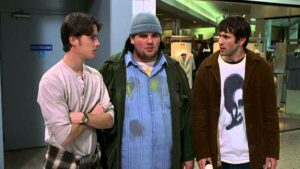 Elvis Costello once famously said, “you have 20 years to write your first album and you have six months to write your second one.” Kevin Smith’s Clerks was released in October 1994, with Mallrats following 53 weeks later. Smith openly admitted to broadening the comedy and making the humor more predicated on visual gags in hopes of broadening the appeal. The end result was a box office bomb despite a (relatively) meager budget, with the same critics who showered him with praise over his $27,000 feature debut lambasting his attempt to go commercial.

Mallrats is admittedly a mixed bag. Of the “core four” films of the View Askewniverse — Clerks, this, Chasing Amy, and Dogma — Mallrats is the one liable to age the weakest as you yourself age. Regardless of whether or not certain gags land, the movie is a pleasant throwback in itself: liable to make you smile and recall a simpler time when, even if your girlfriend left you, or your friends were busy, the mall was always there.

The film follows the exploits of T.S. Quint (Jeremy London) and Brodie Bruce (Jason Lee), two slackers who make Dante Hicks and Randal Graves look put together. They decide to slum it at the mall after both of their girlfriends leave them on the same day. T.S. was dumped by Brandi (Claire Forlani), the woman he intended to marry, while Brody’s girlfriend, Rene (Shannen Doherty), grew tired of sneaking in/out of his mom’s house and being second-banana to SEGA.

It’s a bustling day at this Jersey mall as every degenerate in the surrounding area seemed to make their way to the center of commerce. There’s Willam Black (Ethan Suplee, taking the role from Scott Mosier), who you might remember as “Snowball” from Clerks, hellbent on seeing a sailboat in one of those hidden images challenges; a 15-year-old girl (Renee Humphrey) writing a book on sex; Gwen Turner (Joey Lauren Adams), another one of T.S.’ exes; the inimitable stoner duo of Jay and Silent Bob (Jason Mewes and Smith); and legendary comic book creator Stan Lee.

Naturally, T.S. and Brodie will run into both Brandi and Rene at the mall. Brandi’s presence is a given, as her father (Michael Rooker) is putting on a tacky dating game show and plans to use his newly single daughter to fill a contestant spot (and smite T.S., two birds, one stone). With no better options, the two decide to enlist in the help of Jay and Silent Bob, who are more than eager to devise a blueprint to sabotage the show.

Mallrats is episodic in structure, cycling between different areas of the mall as if the viewer were walking around and coming across one goofy scenario after another. The dialog is indeed colorful, but not as cerebral nor as reflective as it was in Clerks. T.S. and Brodie aren’t ones to talk about the innocent casualties of Return of the Jedi. Brodie would rather question superhero anatomy and insist to T.S. that the cookie stand isn’t part of the mall food court, but instead is “an autonomous eatery for mid-mall snacking” (to quote a line from Clerks, “he’s blunt but he’s got a point”).

But Smith’s prowess with character writing remains on display. T.S. and Brodie are likable, if dopey, and for every categorically unfunny sequence — I never found the “chocolate-covered pretzel” bit to be remotely funny — there’s a funnier one around the corner. Joey Lauren Adams shares a touching moment with Claire Forlani when Gwen tells Brandi how T.S. is a sweet guy by his very nature, and Ben Affleck’s portrayal of a cocky and aloof store manager who picks up Brandi on the rebound perfectly encapsulates Affleck’s outward personality before it was even known to the world. Mallrats is dumb fun, but like many of Smith comedies, it has a certain charm that renders it likable in spite of its childish tendencies.

NOTE: As of this writing, Mallrats is available to rent on multiple platforms.