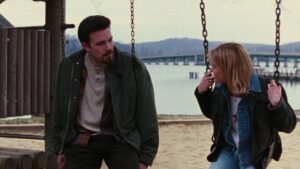 Kevin Smith’s Chasing Amy takes a ton of flak from people who simply look past the idea that the film asserts that all a lesbian needs is a rocking sexual experience with a straight man to see the error of her ways and become heterosexual. If that were actually the case, the film would focus far more on the sex-life between the two leads, Holden McNeil (Ben Affleck) and Alyssa Jones (Joey Lauren Adams in a lovely, versatile performance), than it actually does. It would also provide simple solutions to complex subjects such as love, sexuality, and male inadequacy. Instead, it examines Holden’s fragile state-of-mind, insecurities, and consistency in making the wrong or misguided decision.

Holden is many men in their twenties: the vulnerable soul, who is insecure about himself both physically and sexually. He and his best friend, Banky Edwards (Jason Lee), are a pair of comic book authors, writing the superhero series Bluntman and Chronic, based off the likenesses of their stoner friends, Jay and Silent Bob (Jason Mewes and Smith). Along comes a woman named Alyssa, with far more sexual (and life) experience coupled with a far more open-mindedness to the complexities that are human desires and relationships. Holden falls hard and fast for the bubbly blonde. Alyssa, however, is a lesbian, yet after her initial anger at his confession of love, the two begin a romantic relationship.

Throughout their relationship, Holden can neither reconcile that Alyssa is a lesbian embarking on a new way of life, nor rationalize that she had a great deal of experimental and maybe ill-advised sex long before she even knew he existed. The relationship also drives a wedge between Holden and Banky. Banky resents Alyssa for coming between him and his best friend. On top of slowly losing the closest thing to a life-partner he has, Banky sees Alyssa as a holdup for bigger and better things (IE: the possibility of a Bluntman and Chronic cartoon series). 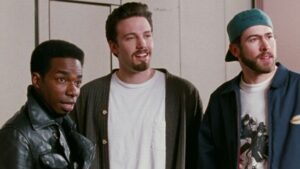 Holden has the exact same problem as Dante Hicks in Smith’s debut Clerks. He can’t put the individual ahead of their actions, which occurred long before his name was even in his girlfriend’s mental rolodex. Many Smith zealots love to quote the famous “37 dicks” line, which is raised when Dante confronts his girlfriend Veronica after she reveals she performed oral sex on 37 men (including him). Most don’t recognize the sheer irony and male-centric attitude of Dante in the same scene: “Why did you have to suck their dick? I mean, why couldn’t you just sleep with them like any other decent person?”.

Alyssa’s past sexual rendezvouses can’t help but impede Holden’s vision on the truly beautiful, mutually supportive relationship he has with the same girl in the present. Alyssa doesn’t care that Holden might not “measure up” in the experience department. That was then, this is now. A person like Holden is what she was searching for all along. That being said, a lot of this movie’s hangups and problems could’ve been solved with the use of the word “bisexual,” but I digress.

After what was viewed as a critical/financial flop in Mallrats, Chasing Amy demonstrates remarkable maturity and storytelling growth from Kevin Smith. His third feature is his top-to-bottom best film, in terms of narrative, pacing, and themes. This is a story for us stupid guys, whose own personal, unaddressed insecurities more-often-than-not cause us to botch the first good thing ever to happen to us in the relationship department. Which brings us to Silent Bob’s spiel. In the third act, in a monologue that would come off as treacly and preachy if not written nor delivered so humanly, Silent Bob tells the story behind the term “chasing Amy.” He hits the nail on the head. Many of us (young) men shame and belittle our flames and girlfriends for the sex they had in the past. Knowing full well we likely had some flings in the past, we can’t rationalize that the sex that they’ve had was for similar, (then) justifiable reasons. We see the woman we love and care about as precious, to the point where the thought that men spent intimate moments with them and took them for granted sickens us beyond comprehension. We lash out. We slut-shame. We take it to a whole other level that does nothing but project our unstable egos and perceived inadequacy that we lack sufficient experience to be with that person. And that woman couldn’t give less of a damn.

By the time we realize the error of our ways, it’s too late.

Chasing Amy is a beautiful movie; Smith’s most misunderstood and unfairly reviled. It’s the rare romantic comedy that shows the consuming, exhausting, and frustrating pains of love. It paints a complicated picture of the fragile man who is vulnerable, tone-deaf, ignorant, and can’t help but discard a good thing by being impulsive. But that’s what happens when you fall in love. You let your guard down as well as your capability to think clearly.

Kevin Smith can say he makes movies about weed, dick, and fart jokes — not an untrue statement, mind you. But don’t undermine what Clerks, Mallrats, and Chasing Amy say about men and how blinded they are by the trivial. I used to emerge from these movies laughing more than reflecting. The older I get, the more it’s become the opposite.

NOTE: Chasing Amy is available to rent on multiple platforms.