Clerks II takes place 10 years after the events of the original film, opening with Dante Hicks (Brian O’Halloran) arriving at the Quick Stop to see that the store is on fire. Fast forward a couple years and both him and his best friend, Randal Graves (Jeff Anderson), are now burger-flippers at the kitschy fast food joint Mooby’s. The film follows Dante’s last day at Mooby’s, and last day in New Jersey for that matter. He’s headed off to Florida where he plans to marry his fiancé, Emma (Jennifer Schwalbach, who’d become Kevin Smith’s wife).

One would assume that for all the bitching and moaning Dante did about the state of his life when he was in his early 20s that he’d be elated to be turning over a new leaf. But nothing is ever simple for him, as we’ve come to learn. He’s ensnared himself in another love triangle, this time with his boss, Becky (Rosario Dawson), who doesn’t have Emma’s money and doesn’t believe traditionally romantic love is real. Meanwhile, Randal is devastated by his friend’s imminent departure, but in true Randal fashion, he hides it by doubling-down on his caustic, apathetic personality. His coworker, Elias (Trevor Fehrman), is the butt of many of his jokes. Elias is a virgin, a devout Christian, and a die-hard Lord of the Rings/Transformers fan. He couldn’t be an easier target. Jay and Silent Bob (Jason Mewes and Smith) are still around too, only this time, with the Lord on their side as they deal dope and blast King Diamond in front of Mooby’s. 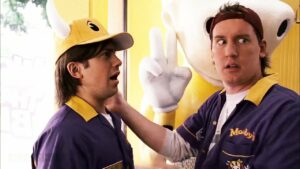 The change of scenery and the added dimension of color sees the View Askew staples graduate in presentation, although the humor is still deliciously low-brow. Clerks II‘s only drawback is the many customers of Mooby’s don’t feel nearly as humanized as the denizens who frequented Quick Stop. But even when I first saw the film, many years ago, I was elated by the fact that Smith carved out a rich and layered plot for the characters he holds so dear.

While less focused on everyday customers, the film does indeed feature a couple uproariously funny moments involving a select few individuals. The famous scene where Randal unknowingly utters a racial slur is made all-the-more hilarious thanks to the incendiary reactions by Wanda Sykes, who takes her cameo to the bank. Kevin Weisman turns up as a Lord of the Rings fanatic just in time for Randal to drop the hammer by saying Star Wars is the superior trilogy of American cinema. Instead of violating a corpse at a classmate’s funeral, Dante and Randal split from Mooby’s in order to ride go-karts while B. J. Thomas’ classic “Raindrops Keep Fallin’ on My Head” plays, making for a tranquil scene of bonding between two dudes you can’t imagine surviving without one another.

Give Smith credit: this is not material that loans itself to a sequel without taking the tempting route of rehashing the original. In many ways, Clerks II (released in 2006) was the precursor to a new era of raunchy, hard-R-rated comedies that would make Judd Apatow a household name. Smith’s sequel predated Knocked Up and Superbad by a full year — how lucky were we to get both those movies in one summer? Just like he did when he made a no-budget comedy about two geeks talking about pop culture and life itself, Smith went were the puck wasn’t for the sequel to the film that launched his (and many other young filmmaking hopefuls’) career. 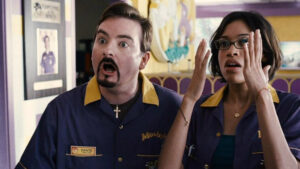 While Trevor Fehrman is afforded more humanization than most punching bags in broad comedies, Rosario Dawson is the standout among the new faces. Dawson assimilates so naturally into the View Askewniverse from the moment she first arrives; her scenes with O’Halloran are the glue that keep Clerks II from veering into total comedic anarchy. Their moments together hit an apex with the sunny, boppy dance sequence to the Jackson 5’s “ABC,” prompted by Becky insisting on giving Dante dance lessons for his wedding day. On a YouTube upload of the scene, one commenter echoed my sentiments. Referencing Dawson’s tank-top, he writes: “As a boy, I was entranced by the jiggle. As a man, I’m entranced by that wonderful smile.” O’Halloran’s is very well-displayed too, for the record.

Clerks II would be amusing if it was predicated on Dante and Randal hanging out while having vulgar conversations and committing derelict behavior. However, Smith and company render it a moving story about friendship and assuring the life you’re trying to live isn’t the one you believe you should be living. The older I get, the more I realize a lot of Smith movies are simply “bromantic” comedies with added raunch. The fact that a lengthy donkey show still doesn’t undermine the heart of this sequel speaks volumes to the strength of Smith’s narrative direction.

NOTE: As of this writing, Clerks II is available to rent on multiple different platforms.